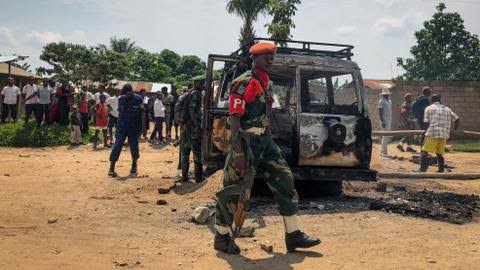 Militiamen reportedly killed at least 20 people during an attack on displaced civilians in northeastern Democratic Republic of Congo.

Jules Ngongo, a spokesperson for Ituri’s military government, told Reuters that fighters from the CODECO militia raided the village of Drodro on Sunday night.

He said they killed 12 civilians, six of them children. Patrick Muyaya, the spokesperson for the national government, later said on Twitter that the death toll stood at around 20.

Repeated attacks by CODECO have killed hundreds of civilians in Ituri province’s Djugu territory since 2017 and forced thousands to flee their homes, according to the United Nations.

CODECO’s fighters are drawn mainly from the Lendu farming community, which has long been in conflict with Hema herders.

“Their objective was to attack the population that was displaced in Drodro,” Ngongo explained.

Others said the death toll was higher.

Ngabu Lidja Chrysante, a priest and coordinator for the Catholic charity Caritas in Ituri, said his colleagues on the ground had seen the bodies of 35 people killed in the attack, which also targeted the local church.

Mathias Gilman, the spokesperson for the United Nations peacekeeping mission in Congo, said at least 16,000 people fleeing the attacks had taken shelter at a nearby site protected by peacekeepers.

Meanwhile, CODECO spokesperson, Patrick Basa denied the group had killed civilians. He told Reuters its fighters had clashed in Drodro with a Hema militia but said the civilians had already fled the area.