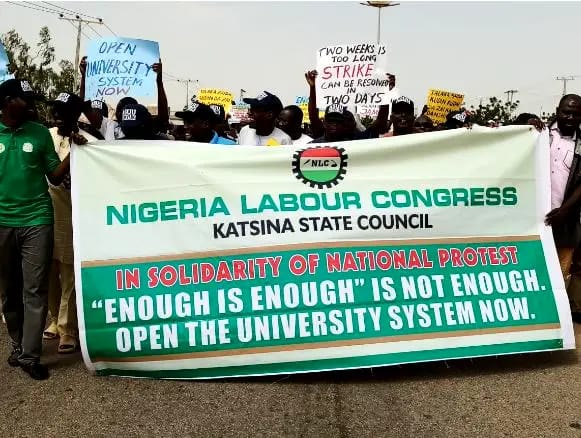 The Katsina State Chairman of the Nigeria Labour Congress NLC, Hamisu Hussaini, has lamented that the federal government is toying with the future of students in the country.

He decried the level of unseriousness that the government is showing about education and effort to end the ASSU strike that has been on for over 5 months.

“How can your wife and children report a serious problem to you, and you put on I don’t care attitude for 5 months. It shows you are not serious and you don’t care about their wellbeing.

The protest which ended at the State House of Assembly where the Katsina NLC Chairman expressed the disappointment of workers in the state over Federal Governments lack of seriousness to resolve the ASUU strike to the Speaker of the House of Assembly.

“We, as a labour are not happy with the Federal Government for toying with the future of our children and we shall no longer be silent on the issue,” Hussein told the Speaker before dropping the protest letter.

The Speaker, Tasiu Maigari responsed that the letter would be delivered to “Where it is supposed to be delivered,” assuring that the state lawmakers were solidly behind the ASUU in its agitation. He also lauded the protesters for being peaceful and orderly.

The protesters included all trade unions affiliated to the NLC, the state students union among others.