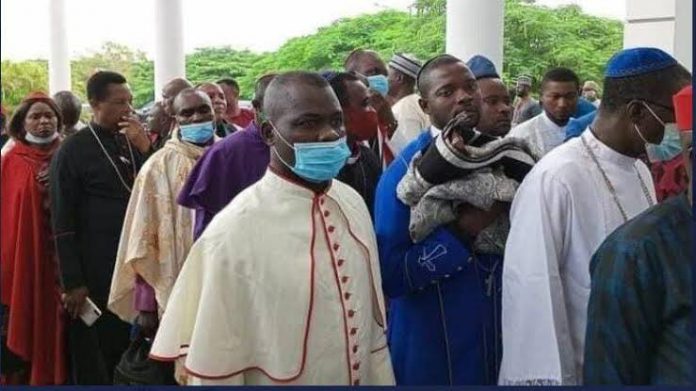 The alleged fake clerics that were seen at the unveiling of the vice presidential candidate of the All Progressive Congress, Senator Kashim Shettima, have come out to present their ordination certificates and proofs of their ministries.

The clerics affirmed that although they graced the occasion without the consent of the Christian Association of Nigeria (CAN) they were not fake preachers as being portrayed on social media.

They claimed that the Christian Revival Evangelical Mission Worldwide was owned by Apostle Godwin Livinus; Divine Prophetic End Time Gospel Faith in Kubwa was owned by Bishop Dr. Emeka Theodore, and the Light House of all Nation Ministry, which has Bishop Emmanuel Sunday Jayeola as General Overseer among others.

The church founders explained they were gathered at the venue under the aegis of the Muslim-Christian Love Foundation, adding that they were at Shettima’s presentation to show solidarity.

“We never claimed to represent CAN or portray ourselves as their emissaries.

“Although Senator Kashim Shettima took the mantle of the state at a difficult time marked by terror attacks and deadly insurgency, his mature, cautious, and decisive management of the state’s affairs helped preserved the social fabric that held several communities together and reassured members of the Christian faith that the government remained committed to their freedoms and wellbeing.

“His (Shettima) rebuilding efforts targeted at the Christian community, including the reconstruction of churches affected by terrorist activities.”

The clerics condemned the harassment they were made to face over their attendance, lamenting that the social media has caused strained social ties and divisiveness.