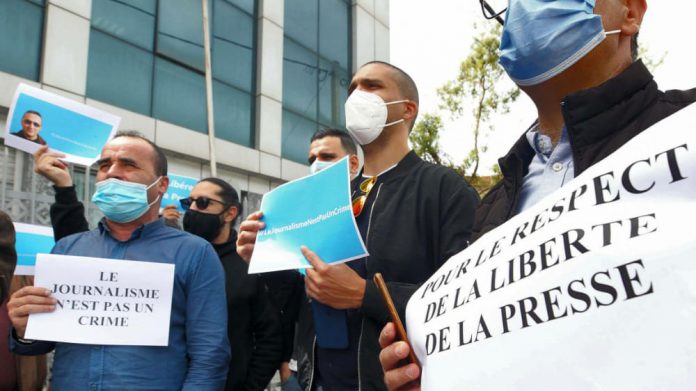 Algerian journalist Rabah Kareche, who reported on a protest movement by the Tuareg minority, has been sentenced to serve eight months behind bars.

According to his newspaper Liberte said a court in the southern town of Tamanrasset handed Kareche, who was arrested in April, a one-year term with four months suspended. Taking into account time served, he has four months left in prison.

He had been charged with “spreading false information liable to damage public order” and was accused of posting reports that could trigger “segregation and hatred within society”.

Rights group Amnesty International denounced the sentence as a new blow to freedom of the press in Algeria, and called for Kareche’s release.

Kareche was arrested after reporting that the Tuareg, a Berber minority who have long complained of economic and social marginalisation, had protested over “expropriation” of their historical lands.

His detention triggered protests from fellow journalists, especially after President Abdelmadjid Tebboune described Kareche as an “arsonist” in an interview before his sentencing.

To the dismay of rights and media freedom groups, the government last year criminalised the dissemination of “false news” that “harms national unity”.

Human Rights Watch has repeatedly accused Algerian authorities of resorting to criminal prosecutions against journalists and others using vaguely worded offences in the penal code.

The New York-based Committee to Protect Journalists (CPJ) said Thursday “Kareche’s only crime was doing his job as a reporter” and he should not be forced “to spend even one day in prison for his work”.

The CPJ said Kareche must be released “immediately and unconditionally”, and urged the authorities to let journalists in Algeria “cover the news without fear of imprisonment”.

Magashule plays ‘significant’ role behind scenes, but has no impact on...

Teni’s debut album to be released in March