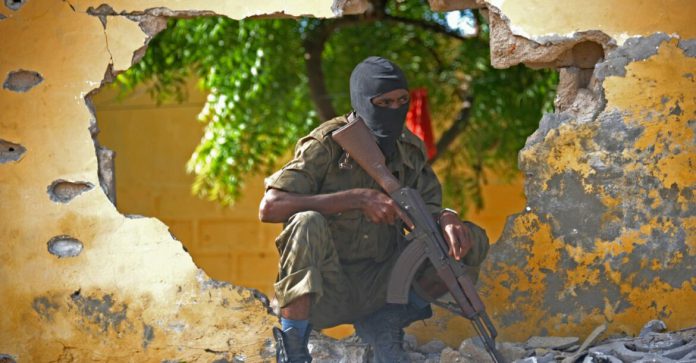 The police officials disclosed that at least four people died and nine were others wounded on Tuesday when a suicide bomber blew himself up in a restaurant near an army barracks in the Somali capital.

According to Abdirahman Adan, a police officer stationed near the scene, the attacker walked into a Mogadishu tea shop and detonated the explosive vest he was wearing.

“We have confirmed four dead, and nine others wounded,” he said. “The casualties were taken to hospital.”

The militant group Al-Shabaab claimed responsibility, saying it was targeting Somali soldiers undergoing training at a Turkish-run military academy nearby.

Witnesses said the tea shop was popular with soldiers stationed nearby.

“The explosion destroyed the kiosk and the entire area is chaotic,” said Mohamed Yare, one of the witnesses.

The spate of attacks comes as Somalia limps through a political crisis caused by long-running disagreements over overdue elections.

The president and prime minister have been at loggerheads over the process, which is more than a year late and has been marred by violence.

The latest agreement has earmarked February 25 as the deadline for the completion of long-delayed parliamentary polls, the last step before a vote for a new president can occur.

The impasse has worried Somalia’s international backers who fear it distracts from the threat of Al-Shabaab, a violent insurgent group that has been fighting the weak central government for over a decade.

Nigerian Singer Waje Recounts Her Experience After Banned From Church For...

22 Years with HIV: South African Woman celebrates being a Survivor