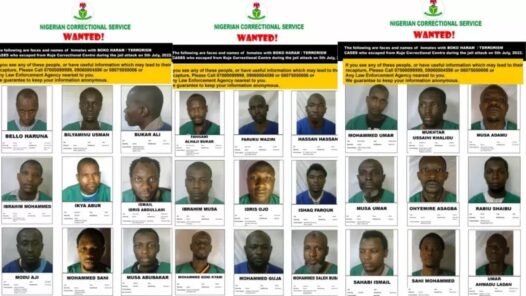 The Nigerian Correctional Service (NCS) has released the details and pictures of the 68 Boko Haram suspects who escaped from the Kuje Correctional facility.

According to a report by BBC Pidgin, the officials have also promised to release the details of other prisoners who escaped from the facility.

The terrorists, using high explosives and guns, breached the facility, leading to the escape of over 800 of the 994 inmates on Tuesday night.

It was also reported that an NSCDC officer and four inmates were also killed during the attack.

The spokesperson of the Nigeria Correctional Service (NCoS), Umar Abubakar, on Wednesday, said over 400 of the escaped inmates had been recaptured while 443 were still at large. Another 16 inmates who sustained various degrees of injuries were receiving treatment.

About 24 hours after the incident, a terrorist group, Islamic State West Africa (ISWAP), claimed responsibility for the attack.

In a video shared by the terrorist group on Wednesday, many of the inmates were seen fleeing the prison while the terrorists chanted ‘Allahu Akbar’.

ISWAP is a breakaway faction of the Boko Haram sect that has terrorised the North-east region of Nigeria for over a decade.

Africa, particularly the Lake Chad region, which the North-eastern region of Nigeria is part of, also battles ISWAP terrorists who are believed to be affiliated with ISIS.