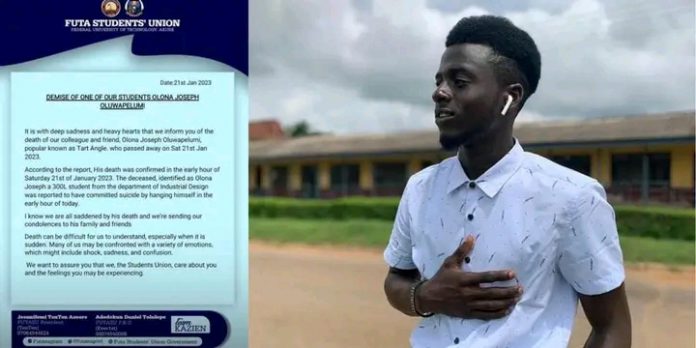 A 300-level student of the Federal University of Technology, Akure (FUTA), Ondo State, Oluwapelumi Joseph Olona, has passed on.

The student of the Department of Industrial Design ended it all inside his room at the Aule area of Akure and his body was found in the early hours of Saturday, January 21, 2023, after his close friends forced the door open.

Multiple sources revealed that his action might not be unconnected with depression and financial constraints which he battled with.

A friend of the deceased, Omoniyi Enoch, who spoke with the Union of Campus Journalists of FUTA, said the deceased had a financial misappropriation issue with his Department because he was the Financial Secretary until his demise.

“When school resumed for the 2021/2022 session, the Treasurer of the Department wasn’t around to receive payment for dues so Joseph (Olona) decided to do it on his behalf. The President later requested that he should send N100,000 to him for a Departmental project. He sent it using his digital bank. He was debited but the President didn’t receive the payment.

Several emails were sent to the bank but the issue wasn’t resolved. Due to that, he was so pressured about it and everyone secluded him. He hasn’t attended lectures since we got back from the Christmas break because of the pressure,” Enoch said.

He added, “Yesterday morning, I went to get my phone from him because his phone is faulty and we both shared my phone. He informed me that his HOD called his daddy and said he engaged in fraud. He was very disturbed about it.”

Meanwhile, spokesperson of the State Police Command,Funmi Odunlami, confirmed the incident in a statement on Saturday, January 21, 2023.