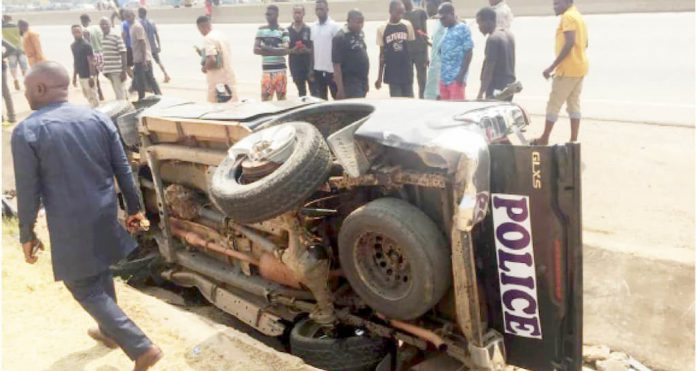 Not less than three police officers have reportedly lost their lives on Sunday afternoon, January 9 in an accident along Kubwa Expressway opposite the popular Gwarinpa Estate in the Federal Capital Territory.

It was gathered that the incident was a lone mishap, which involved men of the Special Tactical Squad (STS) of the Nigeria Police.

A witness at the scene identified as Musa, disclosed that the accident occurred when one of the tyres of the speeding police van burst.

He explained that the Police Hilux van suddenly veered off the road and entered a drainage leaving three officers among the occupants dead instantly and others injured.

“I was about crossing to the next lane when the police escort van on speed suddenly lost control and crashed into the drainage. Three policemen dead on the spot,” he said.

The spokesperson of FCT Police Command, Josephine Adeh, a Deputy Superintendent of Police (DSP), described the incident as unfortunate.

Adeh said she did not know the number of casualties in the “unfortunate” development.

“It is really sad we lost our officers”, Adeh lamented.

We don’t want you anymore; it’s not by force to serve...