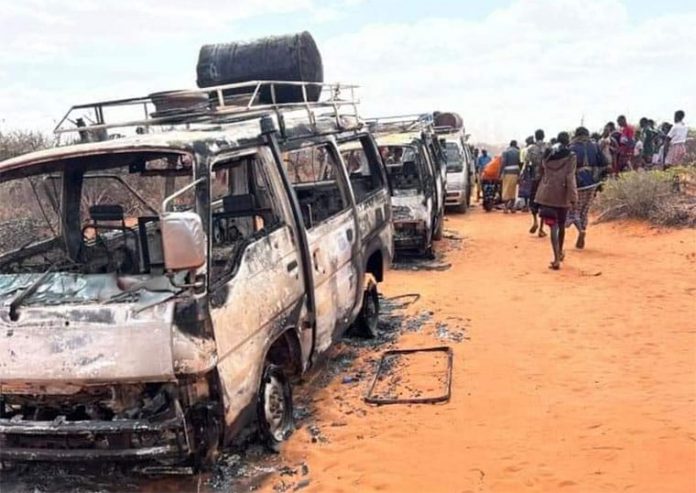 Somali officials and residents revealed that al-Shabaab militants killed at least 21 travellers in the country’s central region of Hiran.

Mahas district commissioner, Mumin Mohamed Halane said the killings occurred in the outskirts of Beledweyne, a town around 300 km north of Mogadishu.

“The militants ambushed the travellers in nine vehicles, indiscriminately opened fire on them and killed 18 civilians,” Halane said over the phone with VOA.

“Three more civilians died when improvised explosive device apparently planted by the militants targeted their vehicle in the same area,” he added.

“Al-Shabaab is targeting civilians because they are in a desperate situation and want to make the locals surrender. That will never happen. We will fight with them to our last drop,” Halane said.

The elders said during the attack the militants burned trucks laden with relief food. A government statement posted on the website of the state news agency, Sonna, confirmed that al-Shabaab fighters had burned trucks carrying relief food to Mahas and “killed most of the people on board the vehicles.”

Meanwhile, the government condemned the attacks on civilians stating that:

“We condemn the heinous and cowardly attacks in which the al-Shabaab militants are targeting civilians, while they wouldn’t dare to face our brave soldiers and the locals who organized themselves to defend from the aggression of al-Shabaab.”

The “Somali National Army will retaliate with its own punitive military measures,” he affirmed.