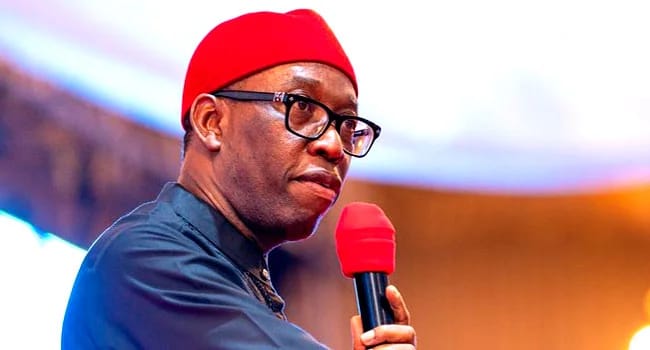 The vice presidential candidate of the Peoples Democratic Party (PDP), Ifeanyi Okowa has asserted that the All Progressives Congress (APC) is not a smart and organised political party.

Okowa made this assertion while featuring on Politics Today, a current affairs programme on Channels Television, stating that Tinubu’s decision to pick a political associate from Kastina State, Kaburi Masari as a placeholder ahead of the Independent National Electoral Commission (INEC) deadline shows that APC is not organised as a party and smart.

“You can find that the APC is finding it difficult to get who would be their vice presidential candidate, we are hearing something we have not heard before, somebody on placement to be replaced, they are actually not smart, that makes us believe they are not even ready for the election, there seemed to be a lot of confusion in the APC, unlike us, right from day one we‘ve made our decision and I believe we‘re on the right part.”

Okowa said that he is an Igbo from the Delta in the South-South, despite the South-east legitimate demand for the presidency,

He opined that the North-East equally had the right to agitate for the presidential seat as both zones had yet to produce a president of the country.

Okowa urged them to continue fighting for it, pointing out that they must do it through a democratic process.

“When we were talking about the issues of presidency, if the PANDEF – it is not just about PANDEF, or South-West’s Afenifere, or the Middle Belt or the Ohanaeze (in the South-East) alone; in their collective voice, if they had insisted that ‘the presidency, we want it this time and it must be from the South-East’…a good request. But the real truth is they were just asking for a southern presidency without trying to situate it where ordinarily it should be.”

US lawmakers to meet Taiwan president as China seethes