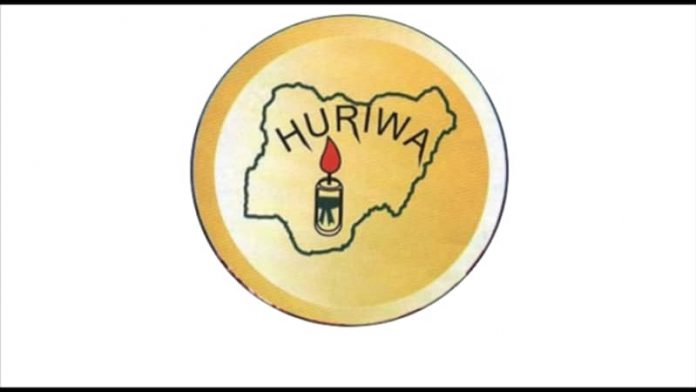 Prominent civil rights advocacy group, Human Rights Writers Association of Nigeria (HURIWA), on Friday, harped on the need for financial accountability and transparency among all the 18 political parties in Nigeria as the country heads to the poll in 2023.

With the full-fledged commencement of campaigns for next year’s election, HURIWA’s National Coordinator, Comrade Emmanuel Onwubiko, in a statement, urged Nigerians not to make any financial donations to political parties with sordid and embarrassing corruption history.

The group referred to the mind-boggling corruption and financial scandals that have rocked the two main political parties in Nigeria just this year and urged Nigerians to take note of the graft in these two parties before casting their votes.

In terms of receiving funding for campaigns, HURIWA maintained that political parties must act in tandem with constitutional provisions as enshrined in Section 85 of the Electoral Act 2022 and Section 225 of the Constitution of the Federal Republic of Nigeria.

Of late, the ruling All Progressives Congress and opposition People Democratic Party have been embroiled in high-profile corruption cases better imagined.

For instance, the National Chairman of the All Progressives Congress, Senator Abdullahi Adamu, on Thursday, opened a cankerworm within the party when he complained of the level of corruption in the system under the Governor Mai Mala Buni-led Caretaker/Extraordinary Convention Planning Committee, saying he inherited N7.5bn debt from the Buni-led caretaker committee and that there was no financial control, “no system, no due process. Everybody doing what he wanted to do”.

Also, five members of the PDP National Working Committee returned N151 million paid to them as a two-year housing allowance in circumstantial situations.

Commenting, HURIWA’s Onwubiko said, “The grand corruption and malfeasance within major political parties is perplexing but not surprising. The financial status of mainstream political parties and allegations of multi-billion-naira scams tearing them apart is enough for the Economic and Financial Crimes Commission to probe the parties and for the Independent National Electoral Commission to do its oversight function, do due diligence and stop sleeping.

“Section 225 (2) of the Constitution states that ‘Every political party shall submit to the Independent National Electoral Commission a detailed annual statement and analysis of its sources of funds and other assets together with a similar statement of its expenditure in such form as the Commission may require.

“Constitutionally, therefore, parties’ finances must be transparent and accountable because you can’t have corrupt political parties and expect them to produce corrupt free members who will go on to win the election and run the government. So sanitising the parties is critical to achieving good governance. Nigerians need to take note of this mind-boggling corruption in these two parties before casting their votes unless they clean up their Aegean stables.”