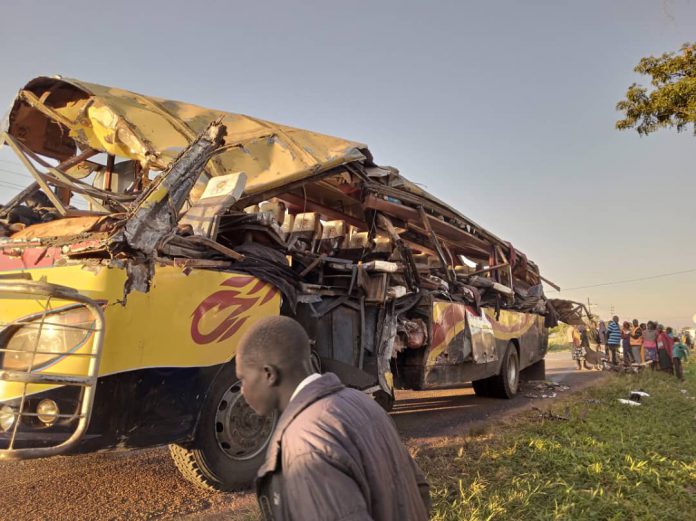 At least 16 people are said to have died and 21 others injured on Friday morning after a bus rammed into a stationary trailer at Adebe trading center along Kampala-Gulu highway in Uganda.

According to him, 12 people died on the spot while four others died at Atapara Hospital where they had been rushed for treatment.

“Police traffic and general duty visited the scene immediately on receiving the report and confirmed 12 people died on spot while four others died from the hospital meaning so far a total of 15 dead bodies and yet to be identified number of survivors rushed to Atapara Hospital, some in critical condition for treatment,” SP Okema added in a Friday morning statement.

According to him, the dead bodies were conveyed to Anyeke Health IV pending postmortem.

“Cause of the accident is yet to be established but preliminary findings indicate wrong parking by the trailer driver with no warning signs. It’s a very unfortunate incident, we call for calmness from members of the public, our condolences to the bereaved families,” he added.

According to the statement, the biggest cause of the crashes was reckless driving where 20 fatal, 39 serious injuries and 17 minor accidents were registered.