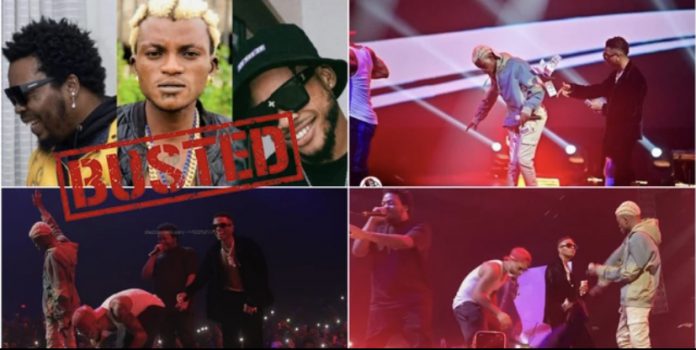 Nigerian show promoter and manager, Kogbagidi, who manages the affairs of Nigerian artist, Portable, took to his Instagram page to post a video of himself, sending the singer out of his house and seemingly cutting ties with the artist.

On his Instagram stories, he wrote that, “Unruly and unprofessional behaviour is always expected from upcomings. You can never tell what goes on in their mind and head. I’m shocked at this point. Do I need to fix your career and your head at the same time?”

In the now viral video, Kogbagidi can be seen sending the artist out of his house, while repeatedly saying that he never collected a dime from him.

Portable had earlier taken to his TikTok account to express displeasure at celebrated dancer, Poco Lee’s involvement with his hit record, ‘Zazoo Zeh.’

You will recall that a few days ago, a video of a sobbing Portable hit the internet, while he was holding the legendary Olamide, and thanking him for featuring on the hit record. When the record hit Audiomack, it was doing 2,000 every 10 seconds. A lot of fans also pledged money to Poco Lee via Audiomack Supporters.

In his outburst, Portable questions Poco Lee, “Poco Lee, I am the one who sees a gun but doesn’t shoot. You no show love o. Shey na you get Zazoo ni? Na Olamide bless me o, but you carry my song. You don rip me now. Even if you worked on the song, why is your name first in the credits?

“Na me get Zazoo. It should be Portable X Olamide featuring Poco Lee. Are you mad or something? N*gga, respect yourself. If they talk to you, don’t argue. Do normal, so you can buy a hummer o…”

He also claimed that he won’t agree to the release of a video for the song.

In the end, he claimed that when Olamide brought him on stage to perform ‘Zazoo Zehh’ at the Livespot Festival, Wizkid sprayed him $3000, but Poco Lee only gave him $600.

Meanwhile, Nigerian celebrities like Olamide, Yomi Fabiyi, Slimcase and more have been pleading with the manager to forgive his  erring ward.