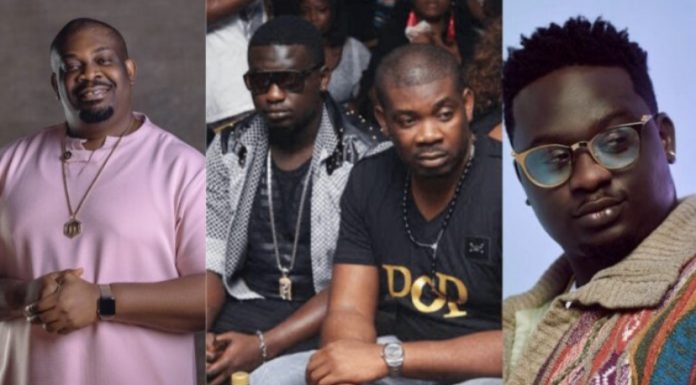 Nigerian hip hop musician, Lawal Olalekan Olumo otherwise known as Konga has argued that he brought fellow singer Wande Coal to the limelight contrary to claims by Don Jazzy he made Wande Coal who he is.

In an Instagram post, Konga stated that the claim by Don Jazzy that he brought Wande Coal to prominence was erroneous.

Don Jazzy, a Nigerian music mogul had made the claim on TV.

But Konga in his Instagram post explained that: “I did what I did to help WC being a young talented student of unilag to achieve his dreams, which i knew will definitely uplift mohit record to attain another level in the entertainment industry as at then, and having him on Mohit record actually boosted their brand in all ramification, so after 17yrs of no compensation nor gratitude from your record label, this what I get in return from Don Jazzy.”

“With all due respect Wande Coal please remind your ex OGA how I left my event to go search for you inside Unilag campus “Spot Center” and then brought you to the back stage and introduced you while also asking you to sing “Ololufe” for Don Jazzy and bangalee at the same show I was paid to perform alongside dbanj.”

The ” Lori Le ” music crooner who has featured many top musicians like 2baba, X-project in his numerous hit tracks, believes in giving honour to whom honour is due.