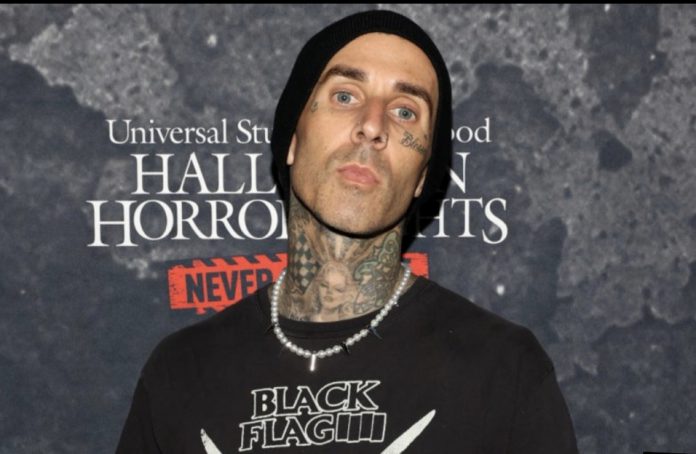 American Musician and Drummer, Travis Barker has revealed he is now dealing with COVID-19, Just two months after being hospitalized with pancreatitis.
The rocker took to his Instagram page on to share the news with fans, posting a stylish, moody shirtless snapshot of himself swinging some drumsticks.
“Covid sucks🤬 I’d rather be playing drums,” Barker captioned the post.
The 46-year-old drummer has been performing on tour with Machine Gun Kelly for the last leg of his Mainstream Sellout Tour, which is set to conclude in October.
As Kelly wrote earlier this month, Barker has supposedly been going against his doctor’s orders to perform live, following his earlier health battle.
In late June, shortly after his wedding to Kourtney Kardashian, the musician was unexpectedly hospitalized.
“I went in for an endoscopy Monday feeling great,” Barker wrote on his Instagram Story at the time. “But after dinner, I developed excruciating pain and I have been hospitalized ever since. During the endoscopy, I had a very small polyp removed right in the very sensitive area, usually handled by specialists, which unfortunately damaged a critical pancreatic drainage tube. This resulted in severe life-threatening pancreatitis.”
A source told Newsmen earlier this month that “Travis’ health is top priority right now,” as he and Kardashian are considering trying to have a baby together.