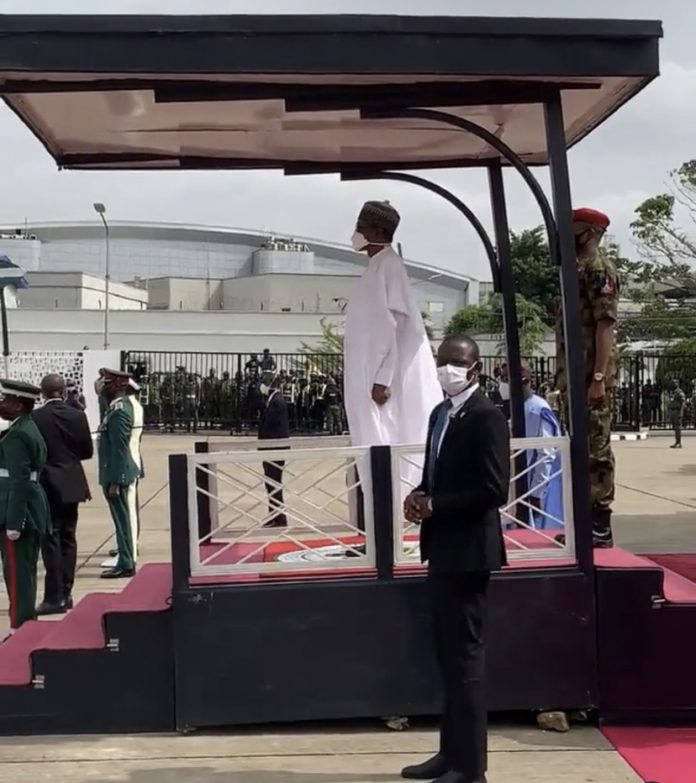 Terseer Waya, has derided the use of stones to help the stage the President Muhammadu Buhari stood on during the opening of the new terminal at the Murtala Mohammed International Airport in Ikeja, Lagos state.

On Tuesday, he made his dissatisfaction known in an Instagram and Twitter posts on, illustrating the action as a lack of standard.

He posted, “How can the biggest economy in Africa be using stones to hold the stage the president of Nigeria is standing on? As in we no get standard or what?.”

The statement of the Lagos Chief Press Secretary, Gboyega Akosile on Tuesday read, “Lagos State, Nigeria’s hub of commerce, is set to witness a rapid economic growth, as a major remodelling project undertaken by the Federal Government at the Murtala Mohammed International Airport, in Ikeja comes to fruition.

“Governor Babajide Sanwo-Olu joined the president to unveil the new MMIA Terminal 2, designed and built under the ambitious rehabilitation programme of the Federal Ministry of Aviation in which 22 federal airports were marked for upgrade and remodelling.

“At the occasion, Lagos State Government signed Memorandum of Understanding (MoU) with the Federal Airport Authority of Nigeria (FAAN) to construct ancillary road infrastructure that will create seamless vehicular connectivity to the airport through Alimosho axis.”

The CPS unveiled that the terminal was founded 43 years ago, and that the Lagos state Governor, Babajide Sanwo-Olu, united with thepresident to unmask the new MMIA Terminal 2, designed andmanufactured under the rehabilitation programme of the FederalMinistry of Aviation.

Prince Nelson recounts infusing time on an event, only to have...