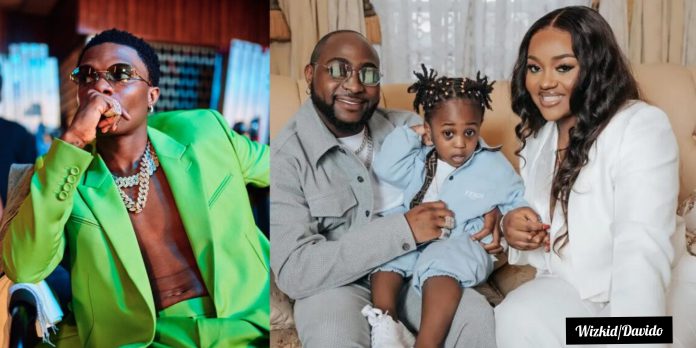 Popular Nigerian singer, Ayodeji Balogun, better known as Wizkid has deleted his promotional tweet for the release of his new album to commiserate with Davido.
It would be recalled that the 3-year-old kid passed away after drowning in the swimming pool in his father’s home in Banana Island on Monday, October 31, where he was rushed to the hospital but was sadly pronounced dead on arrival.
Shortly after the report was shared online on Monday night, Wizkid took to his Twitter page around 11:33PM to promote his forthcoming album ‘More Love, Less Ego’ which is set to drop this Friday, November 4, 2022
However, the news of Ifeanyi’s death was not yet confirmed at the time as netizens were waiting for his parents to release a statement about the tragic incident.
Meanwhile, Wizkid, on seeing the commotion online, deleted the promotional tweet in less than a minute.
This action has sparked massive reactions online, as netizens commended him for being sensitive enough to respect Davido in his trying time despite their alleged rift.
Read some reactions below,
@xothehybrid wrote, “Wizkid is so sensitive..remember when he gave reekado a knock on the head on Twitter cos he wanted to drop a song when the country was in a tight spot. Most actually dragged him for it..some even said he should go beg reekado “
@internationalnyeweli wrote, “He did good, no hate only sadness when a child dies”
@leeeymaarh wrote, “I like wizkid he’s filled with empathy … Omo this is really sad 😢”
@bri_zyyy wrote, “He’s a father, he understands how this hurts, you can’t even wish for an enemy this kind of pain. It’s deep.”