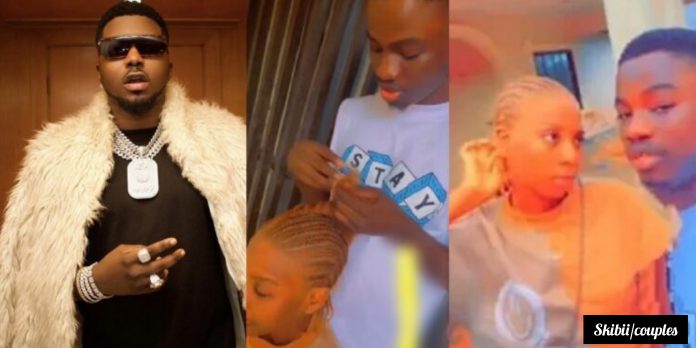 Nigerian singer and songwriter, Skiibii, has gifted a young Man who braided his girlfriend’s hair because he couldn’t afford to get her a human hair wig.
The couple recently went viral on social media after the boyfriend shared a video showing how he surprised his girlfriend with a new hairstyle.
In the viral video, he asked his girlfriend to loosen her hair because he wanted to take her somewhere, which she obliged.
They boarded a bike to a saloon where he paid the hairstylist to do a simple cornrow for her.
Towards the end of the video, he was heard promising to get his girlfriend a wig when he has the money.
Meanwhile, the video went viral and caught the attention of Nigerian singer, Skiibii, who gave the boyfriend money to buy a wig for his lover.
The couple have now taken to social media to express gratitude to Skiibii.
However, the excited girlfriend in a new video, thanked Skiibii for his kind gesture, adding that the cash gift they received from Skiibii is actually too much for them to use to buy a wig.