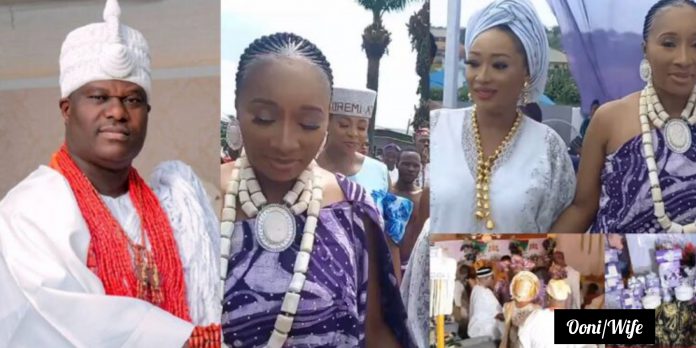 The Ooni of Ife, Oba Adeyeye Enitan Ogunwusi, has married another wife, Princess Ronke Ademiluyi, making her the 5th
This wedding ceremony came few days after the monarch took in a fourth wife
The traditional wedding ceremony of the monarch and his latest bride, Queen Ronke, is underway in Osun State.
Meanwhile, just like his previous weddings, the monarch was not in attendance at the wedding ceremony. However, his chiefs, royal guards, and royal staff of office were there to represent him.
The latest Queen, Aderonke Ademiluyi, is a popular businesswoman and is said to have known the King before he ascended the throne in 2015.

Cameroon Goalkeeper Onana Breaks Silence After Being Dropped From Team

Eva Alordiah advices parents on sex education for their children