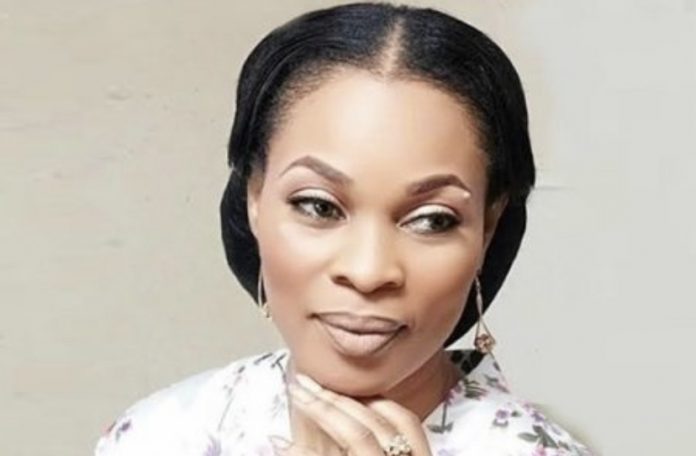 Nollywood actress, Georgina Onuoha has faulted Tonto Dikeh’s ex-lover, Prince Kpokpogiri, for releasing conversations of a woman. She also disclosed he once approached her in 2017.

Onuouha made the claim during an Instagram live session with controversial On-Air Personality, Daddy Freeze, where she faulted the release of private conversations by Prince Kpokpogiri.

The mother of two, who is divorced, said she ignored Kpokpogiri when he approached her to work on a film.

“A case of a man (Prince Kpokpogiri) releasing the voice tape of a woman crying in the most vulnerable state, I couldn’t stomach it even though I am not a fan of that woman (Tonto Dikeh) but that was morally wrong and irresponsible and needed to be called out because there are so many victims of that guy, let me tell you something people don’t know, in 2017 that same guy slid into my dm saying I have a film I want to do and I looked at him and just ignored. Some of them specialize in preying on women, they watch you so as a woman in public space, learn to know your environment and what you do, there are people watching.”

Onuoha went further to weigh in on Tiwa Savage’s leaked sex tape saying she’s not a saint but appealed to young women to be cautious and tread with caution adding that they should be wary of who they trust or associate themselves with.

“I am not a saint, I am a mother of two kids I have been divorced 11 years, I have been in relationships, but one thing I have come to learn is the quest of instant gratification has made many people lose their moral compass and for us to begin to restore that we need to call a spade a spade. Tiwa did not commit an abomination. My take was this, I don’t care how much you love a man or a woman in this time, day and era do not leave yourself vulnerable, even innocent conversation you can have with your girlfriend, guy friend to tell them what you are going through is being recorded and you begin to question people’s moral compass.”

Continuing, she said, “Why would you record me? So, I don’t know if she was intoxicated, if she was physically under the substance of anything, for me, I don’t see any responsible person that will put themself, once you are in a public space, that was a boat with so many girls and all that you should be cautious if you were drinking anything, I mean you are not a child, if you were taking anything to make you incapacitated, if you were in a private jet or something it is your right as an adult but in such a setting we have to exercise caution.

“For me, I wish her well. I wish the other lady well. I wish things were different for them but I take exception to some of the people hailing them. When you say I admire your courage for standing up to a blackmailer it makes more sense and people will understand it from that point.”

Onuoha became famous for her role in the 1992 blockbuster movie ‘Living in Bondage.’ She has since quit acting for a career in health information in the United State of America.

Millions hungry but drought overlooked as Kenya prepares to vote

Patoranking praises Timaya for helping him through low times