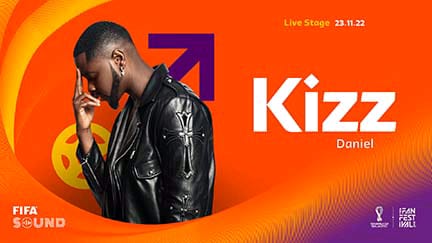 Nigeria’s music sensation, Kizz Daniel, who along with Tekno released ‘Buga(lo lo)’ song on 3 May will take the centre stage this Wednesday at the FIFA Fan Festival, here at Doha’s Al Park.

The FIFA Fan Festival is a recently intoduced reimagined fan destination and on-site entertainment experience for fans at  World Cup.

According to FIFA, this multidimensional, inclusive event will provide new ways for fans to celebrate their shared passion for football while experiencing the very best in music, entertainment, local culture, food, games and lifestyle in a true festival environment.

Kizz Daniel will be second artist on stage after that of America’s Diplo on Tuesday.

His ‘Buga’ released early last May had a blistering three-month run and became the most popular song in Nigeria.

He is the epitome of an all-around entertainer with a magnetic tone, captivating lyrics, an alluring screen presence and undeniably engaging beats; the irrefutable characteristic of all his songs.

He is the founder of Fly Boy Inc record label, which launched operations in 2017,

Kizz Daniel hails from Ogun state, where he completed his education, graduating with a degree in Water Resources Management and Agrometeorology in 2013.

Fresh out of university, Kizz Daniel made an immediate impact with the timeless hit song “Woju” in 2014, , which was named the Hottest Single at the Nigeria Entertainment Awards.

In 2015, Kiss Daniel released a follow-up single, “Lave”, another sensational hit, on his birthday and two weeks later released the video, which was directed by AJE FILMS and shot in different locations, including the eastern part of Africa. The following year, Kizz released his first studio album, ”New Era”.