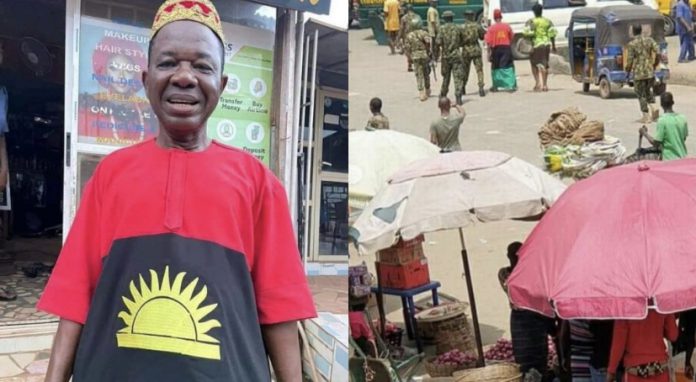 The Nigerian Army asserts that Nollywood Actor, Chiwetalu Agu, was apprehended for pleading for support for the Indigenous People of Biafra (IPOB).

Spokesman of the Army, Onyema Nwachukwu, made this known in a statement titled, ‘Troops Arrest Chiwetalu Agu While Soiciting Support for Proscribed IPOB’.

The army stated that contrary to reports, the actor was not brutalised but only locked up.

Part of the statement reads, “Troops of Nigerian Army have arrested one Chiwetalu Agu while inciting members of the public and soliciting for support for the proscribed IPOB.

“Dressed in a very well known attire of the proscribed group,  Chiwetalu Agu was picked up for questioning while inciting members of the public to join the proscribed group. Though he attempted puting up some resistance when troops made effort to take him into custody, he was not assaulted or subjected to brutalisation.“

“It is therefore pertinent to state that while exercising such freedoms, it must be done within the confines of the law, bearing in mind the imperative for peace,  and national security,”

The army declared that IPOB remains a proscribed any individual or group seen to be projecting and advancing the cause or activities of the group.

The Army said Agu had certainly illustrated tightfisted disposition to contradict peace and security in the region, hence, he is taken into custody for prior investigation.

“It is important to once again place on record that the allegation that he was brutalised is false and should be disregarded accordingly.”