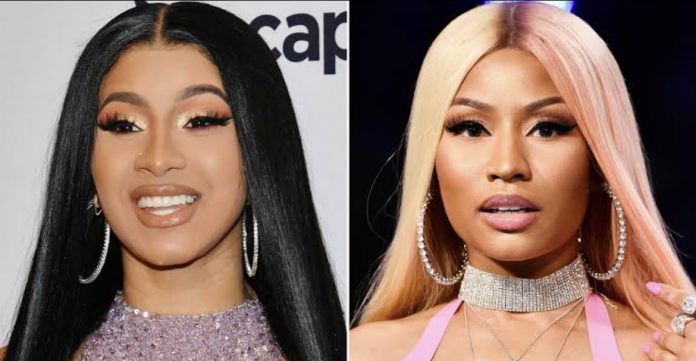 Nicki Minaj and Cardi B has been on a whirlwind of drama after a beef erupted on Twitter between Cardi B and City Girls’ member JT.
Cardi B was involved in a beef with JT from the City Girls, Nicki decided to get involved and Cardi clapped back.
This all came following an explosive back-and-forth between Cardi and JT on Twitter. It began with JT responding to a self-proclaimed “JT hate page” that insinuated she was bitter after GloRilla’s new Cardi-featured single “Tomorrow 2” debuted inside the top 10 on the Billboard Hot 100 chart
A fan mentioned JT and she responded by saying that Nicki was one of the only female rappers to credit her on her remix.
Since she’s worked with Cardi B in the past, not mentioning her was a direct shade to her which Cardi didn’t take lying down.
Furious Cardi B fired back at JT, calling her Nicki Minaj’s ‘lapdog’.
“I hope you don’t think you no BULLY!!!” JT posted shortly afterwards. “Weiner dog.”
Amidst this beef, Nicki Minaj quickly changed her profile photo to that of JT, indicating her support for her.
Cardi B also fired back, changing her profile photo to that of rap legend, Remy Ma, who has a longstanding beef with Nicki Minaj and is widely accepted as having murdered Nicki the last time they beefed.
Nicki Minaj has not too long removed the photo of JT and replaced it with a picture of herself holding a pen in front of her name as a neon sign. Barbz are speculating that this could mean Nicki is writing and heading to the studio for new music.
Cardi continued being petty and kept Remy Ma’s photo up!