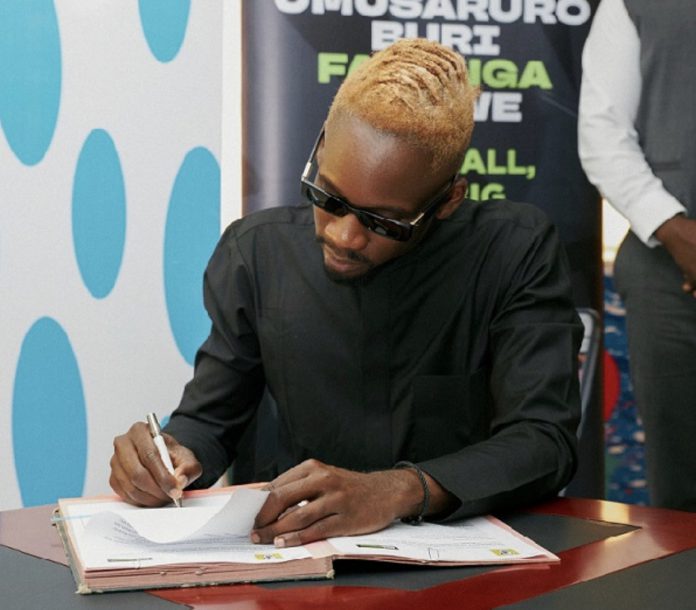 Nigerian artist, Mr Eazi’s online gaming franchise betPawa has officially been announced as the new title sponsor of the Ghana Premier League.
Ghana Football Association, GFA, made this information public during the official contract ceremony which was held at the Headquarters of Ghana’s football on Wednesday, August 3, 2022.
Present at the ceremony was the GFA President Kurt Okraku and the majority shareholder of betPawa, Oluwatosin Oluwole Ajibade better known as Mr. Eazi as well as other stakeholders.
The musician and other officials at the GFA appended their signatures to seal the three-year deal which was worth US$6million, this comes after seven years of no title sponsor for the premiere League.
According to report, an amount of US$ 2 million will be invested into the promotion of the Ghana Premier League each season for three years.
All 18-clubs in the Premier League, according to the GFA, will receive their share of the sponsorship deal entered with betPawa.
The GFA will also initiate ‘Locker-room Bonuses’ which is a winning bonus package for each player and technical team of a winning club in the Ghana Premier League.
The money will be transferred to the accounts of every member of the team right after the match.
Part of the sponsorship will be invested in the construction of an Astro-turf at the Ghanaian Soccer Center in Prampram to be named the betPawa pitch. The construction is expected to start in October 2022.
Mr Eazi boasts an investment portfolio that also includes the emPawa Africa incubator programme and venture firm Zagadat Capital. In June, betPawa sealed a deal with MTN Rwanda’s fintech subsidiary Mobile Money Rwanda to offer customers a range of payment methods.
Meanwhile, Mr Eazi today released a new single titled ‘Personal Baby’. The record is taken from his forthcoming new album.

“India Keeps An Eye”: Centre On Chinese Investments In Nepal

Shatta Wale approves Gambo as the “Future of music in Ghana”

My mom never wanted me to go into music – Ghanaian...