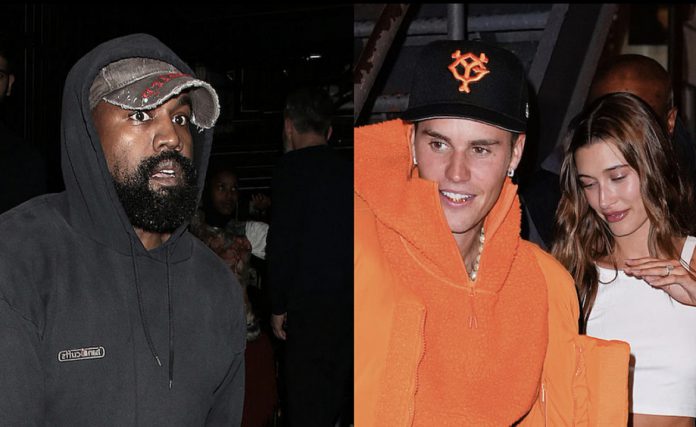 Canadian singer, Justin Bieber has reportedly terminated his friendship with Kanye West after Ye dissed his wife Hailey on social media.
Justin Bieber ended his friendship with Ye because he went too far with attacking his wife, Hailey, claiming she got a nose job. This was after Hailey came to the defense of Vogue Editor, Gabriella Karefa-Johnson, whom Kanye attacked for criticizing his controversial “White Lives Matter” t-shirts.
“My respect for you runs deep my friend!” the 25-year-old model reportedly wrote on her Instagram Story, adding that “to know you is to adore you and to work with you is an honor. the most kind. the most talented. the most fun. the most chic.”
In response, Kanye called out Hailey and warned Justin to “Get your girl before I get mad” while bringing up Drake and Hailey’s dating past in a since-deleted Instagram post. In another IG post, Ye called his wife “nose job Hailey Baldloose.””
The singer felt unfairly treated after Ye attacked his wife, Hailey, claiming she got a nose job.
Meanwhile, sources close to Justin and Hailey say they’re obviously hurt by Kanye’s attacks.
The couple supported him in 2020 while he was going through a tough time in his life, traveling to Wyoming to visit him at his ranch.
The couple believe Kanye crossed the line, mainly because Hailey never attacked him in her defense of Gabriella.
Hailey only said supportive things about her friend after Kanye publicly ripped into her.
Hailey claims she’s never had a nose job, nonetheless.