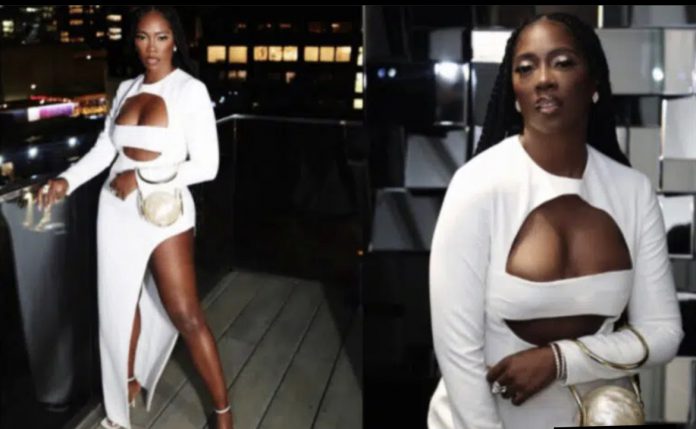 Award-winning singer, Tiwa Savage has caused a stir online as she made a shocking revelation about her hit song, Somebody’s Son.
While many assumed Somebody’s Son from her album, Water & Garri, was a relationship song that centered on finding one’s partner, Tiwa Savage disclosed that she was referring to Jesus Christ.
The mother of one made this known as she headlined the BudxLagos FIFA kick-off Concert at Eko Hotel alongside Davido and others.
During her performance, Tiwa Savage who paused to share the inspiration behind the song, stating that she was referring to Jesus Christ. She also emphasized how everyone was looking for him.
“I am going to tl you guys this story, when I did this song, yeah, a lot of people were like “this is a sure hit but only girls are going to sing this song, guys are not going to sing it. And they were like Tiwa you are taking a risk by making it your first single.
I said to them don’t worry one day I am going to tell this story. You see somebody’s son I was talking about is actually Jesus Christ. For real, so whether you’re a man or woman we are all looking for that somebody’s son right”.
Taking to the comment section, Netizens aired their thoughts on her new revelation.
Emmanuel Patricia: So the song should be used for praise and worship in churches across Nigeria as a gospel song
Hart Sherry: He loves you dearie…. And His arms are always open for you
Joanna Johnie: God don turn somebody all this while Jesus no love you? Chai I no go sing that song again
Oluyemi Olaitan Olaoluwa: Jesus con somebody son!
Emmanuel Nwokoye: Madam keep quiet…. Who dey whine?
Matilda Adogbdgi: Na Jesus Christ he somebody son when e go love you one day, I no understand, but we know say Jesus Christ done already love us.

US Author, Anne Rice dies at 80