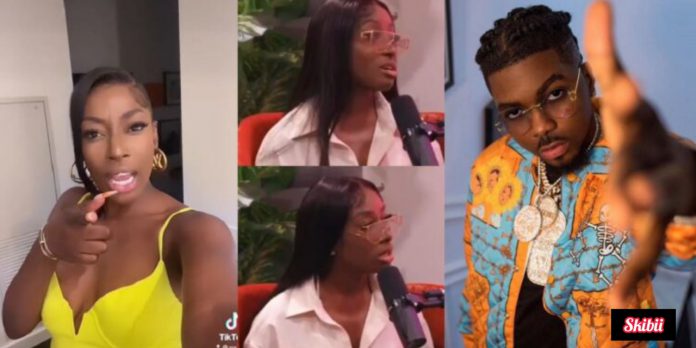 Nollywood actress and disc jockey, Dorcas Shola Fapson, popularly known as Ms DSF, has opened up on her relationship with her estranged lover, singer Skiibii.

It would be recalled that MS DSF and the “Baddest Boy” star raised speculations of being an item earlier in the year after she went online to share loved-up moments with Skiibii, though concealing his face.

In one of the videos that captured the romantic moments, the actress and her man rocked a matching Fendi outfit and another showed them in a room that was exquisitely adorned with rose petals.

Sadly, barely three months after making their relationship public, the pair parted ways, and ever since, DSF has been throwing shade at Skiibii at the slightest opportunity.

In a series of posts, she claimed that the singer was broke and living a fake life. A purported chat between DSF and a friend, narrating how she was the one funding her relationship with Skiibii also made the rounds sometime ago.

Speaking on her short relationship with Skiibii in a recent interview with media personality, Toke Makinwa, DSF noted that she believes she was jazzed.

When Toke asked how her love for Skiibii suddenly took a drastic shift, DSF replied, “That was not love sis, that was Jazz, Juju my eye don clear. I’m a good person, I try… If I should start to talk omo”.

Aside money there is nothing sweeter than being in love” –...

Fuel station managers fill my tank for free when they see...