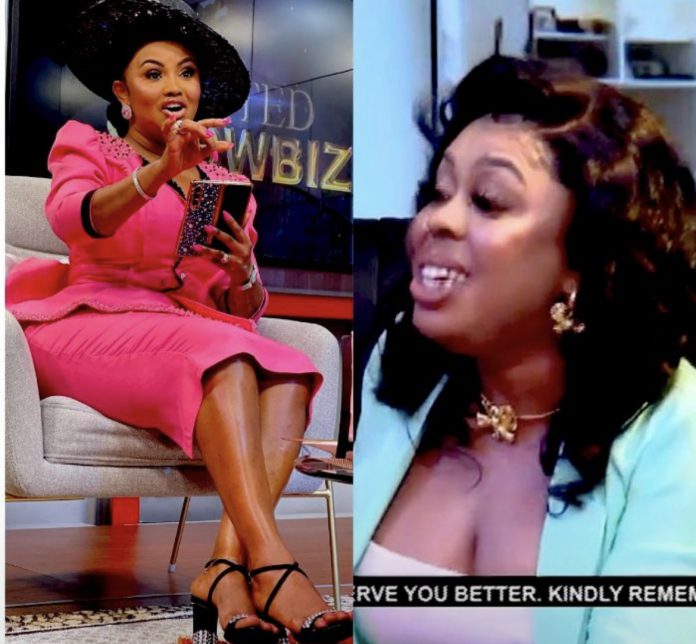 Ghanaian actress and TV presenter, Nana Ama McBrown has been heavily criticized by Ghanaians after acting cowardly and allowing Afia Schwar to hijack her show.
Recall that, the United Showbiz on UTV that took place Saturday night, July 9, was a blockbuster affair as comedienne and Ghana’s loudest, Afia Schwarzenegger made an appearance to address recent trending news.
It was gathered that Afia responded to Wontumi’s against her and travelling to Nogokpo for her curses galore, amongst other rising matters.
The show became a humiliation galore by Fans as they said Nana was scared of Afia Schwarzenegger and watching could only come away with that conclusion because Afia was allowed to run her mouth and make all sorts of accusations and allegations against Chairman Wontumi, Delay, Mzbel and others.
Meanwhile, McBrown as host provided little to no pushback and watched Afia rundown all these personalities.
As a professional host, Ghanaians were disappointed in McBrown for not checking Afia and just allowing her to say anything she wanted
However, Fans said they’d lost respect for her, whilst others said she’s probably scared of Afia.
“Ama lost my respect last night tweaa,” one aggrieved fan said.
A second added: “You sit on national tv to insult someone and Nana AMA sat there looking at her. Looks like they’re all scared of Her”.

Assault: Chris Brown under interrogation for hitting a woman in his...