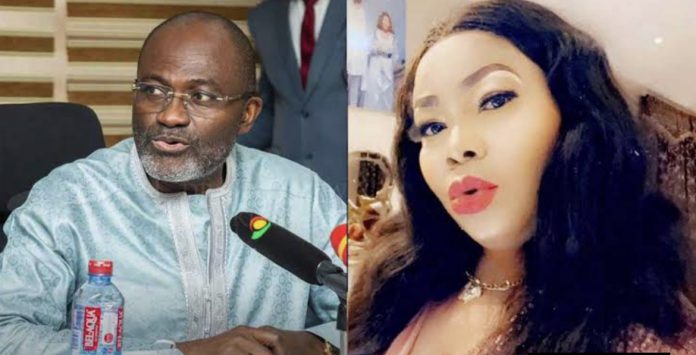 Ghanaian Politician and Businessman, Kennedy Agyapong has chosen a challenging battle as he shifts his attention to Nana Agradaa after she insulted him in a video.
The born-again evangelist made a video of herself ripping Kennedy Agyapong apart over some commentary he ran on her, stating that Kennedy was not a worthy candidate for the presidency because he was unable to keep her secrets.
The controversial woman pointed out she was not scared of the member of parliament, even when she was pained by Kennedy action.
Many of the things Nana Agradaa said may have been controlled if she had been a bit calmer since she was so enraged.
When that video went viral, we anticipated Kennedy would respond with the same energy if only he saw the video.
Well, unfortunately for Nana Agradaa, Kennedy may have seen the video as something seems to have triggered him.
In a now trending news, Kennedy is heard on live television narrating the dark secrets Nana Agradaa told him and his friends in confidence.
However, He did not hold back words as he exposed Nana Agradaa and her dark ways.