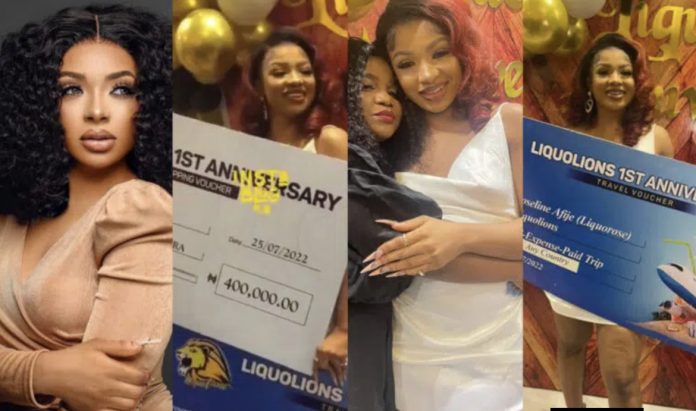 Fans of Big Brother Naija star, Roseline Afije popularly known as Liquorose, went all out to gift her a whooping sum of N400k and an all-expense paid trip to any country of her choice to mark her first BBNaija anniversary.
The reality star who marked her first anniversary of leaving the BBN house yesterday, July 26th got the royal treatment from fans fondly known as Liquolions.
This isn’t the first time her fans are treating her to an expense paid trip.
It would be recalled that, Liquorose had been treated to an all-expense paid trip from her fans in May.
The reality star was spotted in London enjoying some quality time away from work.
Liquorose’s fans revealed on Twitter that they had sponsored her on a trip to London for being hardworking.
According to them, their queen needed a breath of fresh air and needed to be pampered like royalty.
“Liquorose has been so hardworking so @Biggkiks and I decided to surprise her with a trip to London so she can go relax and have a breath of fresh air. Liquorose deserves to be pampered like a royal diamond”.