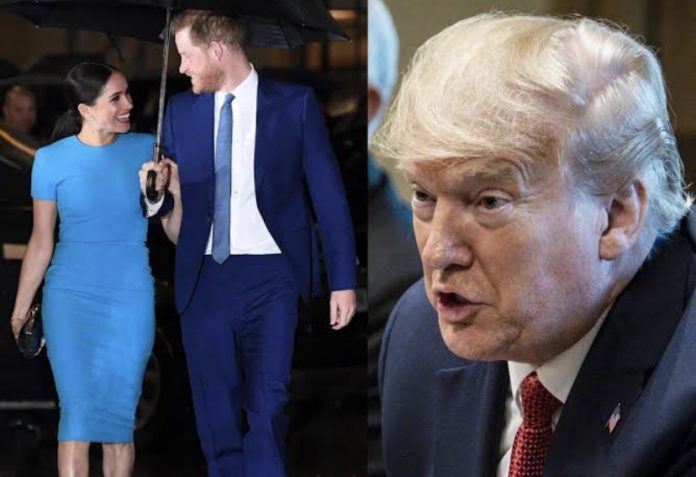 Former president of the United States, Donald Trump, has defined the marriage of Prince Harry and Meghan Mackle’s to what will eventually end on a bad note.
Prince Harry and wife got married in 2018 and has since been eyed by the everyone due to the series of discussions and debates affecting the British royal family.
Prince Harry and his wife vacated the United Kingdom for the US in 2020, after their fierce interview with Oprah Winfrey when they discussed about their battles with the royal family.
Trump, who alleged Harry is being “pushed” around by his wife, Meghan.
Trump, however, forecasted that the marriage will “end badly” as it has become a “ticking time bomb”.
The former president said this while he was been interviewed by Piers Morgan, the British journalist.
He also disclosed Queen Elizabeth ought to have trimmed them of their royal ownership.
He said, “I’m not a fan of Meghan, and I wasn’t from the beginning. Poor Harry is being led around by his nose.
“And I think he’s an embarrassment and I think when she spoke badly of the royal family, but in particular the Queen you know, I met the Queen. It was supposed to be for 20 minutes.”
In the lengthy interview, Trump went further to say, “So I want to know what’s going to happen when Harry decides he’s had enough of being bossed around. Or maybe when she decides that she likes some other guy better. I want to know what’s going to happen when it ends, okay.
“I do. I’ve been a very good predictor, as you know. I predicted almost everything. It’ll end and it’ll end badly. And I wonder if Harry’s gonna go back on his hands and knees back into the beautiful city of London and say, please. You know, I think Harry has been led down a path.
“It was a terrible thing, many terrible things that might have been, as you mentioned, that, that might have been the worst of all, because he was, you know, like her. He was a tough cookie, too. I remember years ago, Prince Philip came to New York, and we were in the Plaza Hotel. And there were many people wanting to meet him.
“And we were all taking a picture with him. Many people and the photographers said, I’ll never forget this. He was tough. The photographer said, please move back there were like 30 of us.
“And he said, ‘No, you move back’. And that was simple. I said, that’s pretty good. You know, this guy’s tough.”
By Damilola Olufemi

Seun Kuti: Parents should not compel kids to be like them

Don Jazzy: I am a shy person who can’t assemble my...