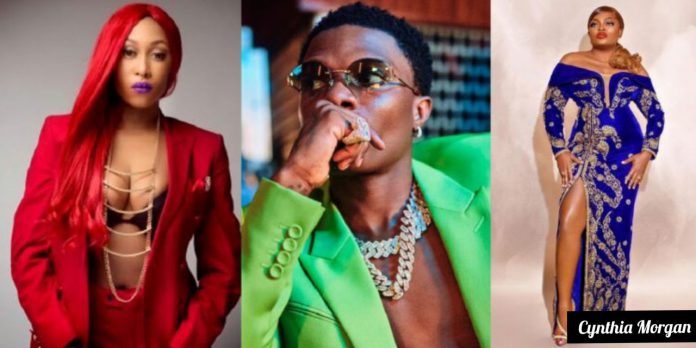 Nigerian singer and songwriter, Cynthia Morgan has shared strange and terrifying ‘prophecies’ she received from God about some celebrities in the entertainment industry and political scene.

The singer turned seer, in a post she shared on her Insta-story, stated that she decided to share the prophecies publicly because she doesn’t have a personal relationship with those involved and she wants the message to get to them by all means.

Cynthia Morgan while speaking about popular actress turned politician, Funke Akindele, she told the latter to pray fervently about her finances so she doesn’t go bankrupt.

This comes on the heels of Funke Akindele’s political ambition to become the deputy governor of Lagos state under the umbrella of the Peoples Democratic Party (PDP).

Cynthia also appealed to Nigerians to pray for music icon, Wizkid’s mental health. This follows the release of his new album ‘More Love, Less Ego’ which has gotten relatively low acceptance by his Nigerian fans

Speaking further, Cynthia told the Lagos Gubernatorial candidate of PDP, Abdul-Azeez Olajide Adediran better known as Jandor, that God said he should pick a side ahead of the 2023 elections or step down from the race.

The 31-year-old rapper also shared a frightening prophecy about Jamaican singer, Popcaan, whom she instructed to pray against untimely death.

Pornography destroyed my family but Jesus will heal everything – Kanye West

We support enhancement of NSSF contribution but we should have dialogue...

Tems defines God as her success, not talent