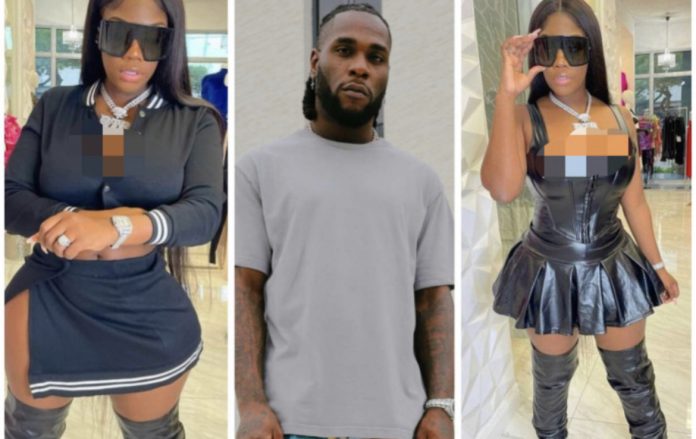 The American rapper and exotic dancer, Brittany Nicole Carpentero, with stage name DiamondTheBody, who singer Burna Boy took as a lover after breaking up with Steflon Don, has caused a massive stir online with her recent claim.
Burna Boy’s new girlfriend has gone viral on social media after revealing that she has slept with more than 2000 men and women since she broke her virginity as a teenager.
The rapper without shame or fear of being stigmatized was captured in an interview discussing her sex life and body count.
The artist who mentioned that she had s*xual encounters with both genders and her body count could surpass 2000, explained how she lost her virginity at the age of 12 and started trading her body.
“I’m telling you my truth. I lost my virginity at 12 years old. I remember the whole thing like it was yesterday. But between 12 to now for my body count, I’d say I’ve slept with like 2,000. I’ve done a lot of women too
She managed that no one can judge her except her maker;
“I’ve been doing men and I’ve been doing women. 2000 s3xual partners, absolutely. It is what it is. Only God can judge me. I don’t care.”
Currently, Diamond the Body is a rapper, performer, and businessman who owns Diamond’s Doll House, one of the most vibrant strip clubs in Los Angeles.
She is rumored to be in a relationship with Nigerian singer Burna Boy after she made a post suggesting so.

‘Mama Rainbow was only pretending to be a good mother’ –...