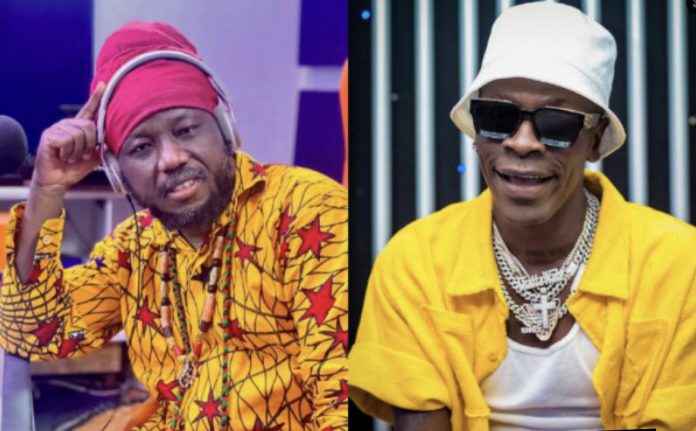 Ghanaian regga artist, Blakk Rasta has repeated his attacks on Dancehall singer, Shatta Wale days after he warned him via Instagram to tread cautiously.
According to Blakk Rasta, Shatta Wale has failed to use his affluence to positively impact the lives of his loyal fans.
Instead, he displays vanity across his socials while most fans suffer the harsh realities of poverty.
“You have a lot of followers. What are you doing with it? That is why I keep talking about Shatta Wale time after time. You supposedly have a huge following, but what are you teaching that following? It is about insults and fooling all over the place. That is all that you are doing.”
Unhappy about Blakk Rasta’s accusations, Shatta Wale took to his Instagram platform to address the matter.
“I came to say to Blakk Rasta that he should change. He should change his ways because he is the person who insults God’s child and calls him a foolish and stupid boy and also talks about him for supposedly spending money anyhow. Blakk Rasta, you can’t show anybody anyhow, because somebody can show you anyhow. I am a f0rk1ng gift of God. I love you guys, but I am going to be coming here every time.”
Blakk Rasta has responded again but chose to be a weapon fashioned against him because he thinks Shatta Wale needs to be guided.
“Shatta Wale. normally, you know say me I no dey have time respond to people like that, you understand; I just want to put you in your place a little bit. Your big mouth like a pig. I say your big mouth is like the Atlantic Ocean. I don’t usually do this, but I want you to understand something small.”

DJ Cuppy engaged as boyfriend Ryan Taylor goes down on one...