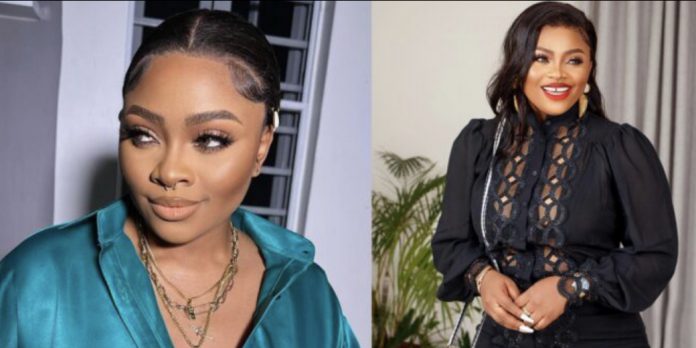 Reality TV star, Tega Dominic, popularly known as Tega has caused a massive stir online after she announced that she’s thinking about starting a talk show about how to make marriages work.
Tega who claimed to be married on the reality show but was enmeshed in a romantic saga with her co-reality star, Boma, took to her Twitter to share her plan
It would be recalled that the mother of one was subjected to heavy criticisms from netizens for kissing and getting intimate with Boma.
Meanwhile, she was accused of not respecting the institution of marriage and for making a mockery of her husband on national TV.
However, she disclosed that she and her husband were separated before she went on the show, and their marriage was a façade.
Well, the 30-year-old tweeted, “I should start a talk show about successful Marriages and how to make it work… 😊”
This didn’t sit well with a number of people who asserted that she’s not in the right position to advise people about marriage.
See reactions below
@toxic_manchi wrote, “U wey ur own marriage get miscarriage cos u no fit control the carriage of you puna”
@rabbeatbae wrote, “Yeah pls do , Boma should be part of the speakers pls , I wan check something”
@euniceibukun wrote, “Coming from someone who’s marriage isn’t working, 🤣🤣🤣🤣 Go and make yours work first… Mtcheeew 🙄”

“I have not been sexually harassed” – Actress, Caroline Igben