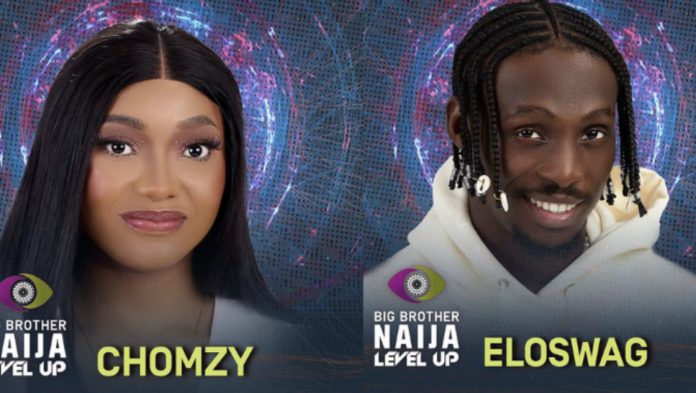 Big Brother Naija season 7 housemate, Chomzy, has emerged the Head of House for week five and the first female to hold the position this season.
Following her emergence at the Head of House games on Monday evening, August 22, 2022, Big Brother asked Chomzy to pick a deputy since the HOH lounge has become accessible.
Chomzy picked Eloswag as her deputy, making him her room partner in the exclusive HOH lounge which they’ve automatically gained immunity and cannot be nominated for possible eviction for the week.
Meanwhile, all housemates has moved to the arena for their HOH games on Monday evening, following their merging on Sunday.
The games were played in two segments; the female housemates and the male housemates.
Unfortunately, all the male housemates were disqualified during the first round as they broke the rules of the game.
However, Chomzy and Bella made it to the second round and competed against each other.
After the round, Chomzy performed better and was made the HOH, becoming the first housemate to enjoy the HOH lounge with Eloswag, whom she picked as her deputy.

Rapper, Falz reacts to news of NDLEA destroying N194bn worth of seized cocaine.

Gates Foundation Announces $1.27 Billion in Health and Development Commitments to...

Focalistic: Davido made me become the first South African to perform...