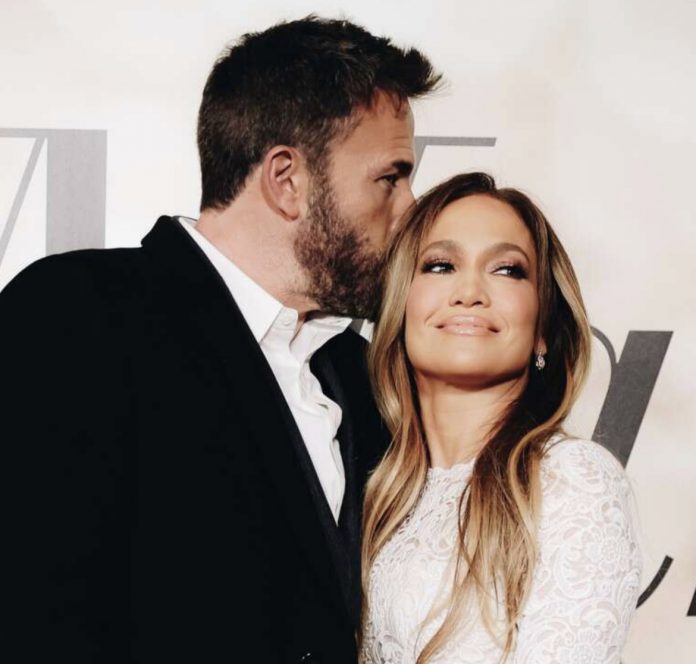 American actor and filmmaker, Ben Affleck and American singer, Jennifer Lopez have tied the knot and cannot keep their cool.
Reports has it that the couple got a marriage license in Clark County, NV, which according to court documents, the license is now listed in both of their legal names, Benjamin Geza Affleck and Jennifer Lynn Lopez.
An unidentified source connected to Jennifer, the couple got hitched, and the license is a signal they are now man and wife.
Meanwhile, Jennifer Lopez was spotted wearing an engagement ring earlier this year while shopping for furnishings with her 14-year-old daughter, Emme.
Soon later, Jennifer sent out a video message in her newsletter to her subscribers with the news.
Catch a glimpse of the beautiful green diamond ring.
However, Ben and Jennifer got engaged in late 2002 but called things off in 2004 before they married.
They both had subsequent relationships apart, including marriages and children, but the ex-couples got back together almost a year ago.
Since they have been house searching together and frequently brought their children along, there have been hints that they will get married.
Congrats to the couple!!!

Is ANC sidelining its youth league ahead of elective conference?

Cele: ‘Police must meet fire with fire’ in response to 22...

Fan warns Asake to be cautious as Olamide signed him