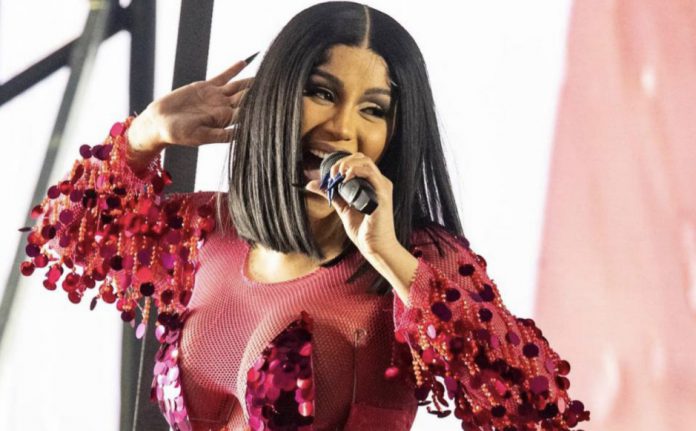 American Rapper, Cardi B has finally revealed the tattoo she got on her face.

Cardi B hopped on her Instagram live video to show off her latest ink additions, revealing her son Wave’s name written in light red-colored cursive on the side of her face while the other tat is of Kulture’s name inked in the same way but with a darker shade on her arm.

“I tatted my son’s name because I love him,” Cardi told her viewers as she pulled her hair to the side and revealed the face tat. “And I tatted my daughter’s name,” she continued, showing off the ink on her bicep.

Cardi B had the internet buzzing back in August when video of her getting a tattoo on her face while on vacation surfaced online.

Tattoo artist Robinson De Los Santos back in August shared video of himself applying the Invasion of Privacy rapper’s newest piece. Another photo of Cardi posing for a pic with Santos. The tattoo was visible but not legible.

While in January, the rapper revealed she wanted to get her son’s name, Wave, tattooed on her face

“Random but ….I’m 1% close to tatting my sons name on my face….I really really wanna do it!”she tweeted. “I want mine on my jaw.”

Random but ….I’m 1% close too tatting my sons name on my face….I really really wanna do it!

More than 130 000 asylum-seekers waiting for appeal applications to be...

EACC says it recovered Sh22.8bn in 3 years, affirms commitment to...