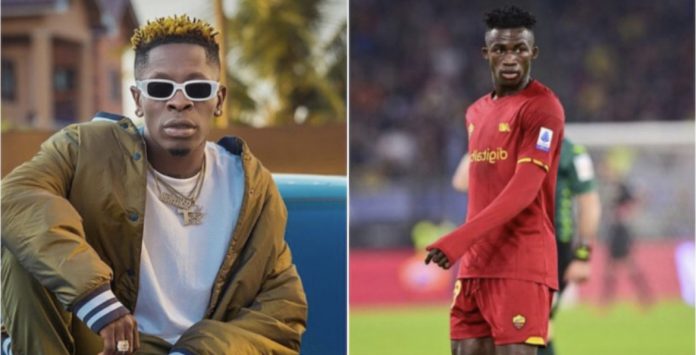 Ghanaian professional footballer, Felix Afena-Gyan has got Shatta Movement fans talking after a grand introduction at the 65,000-capacity-filled Stadio Olimpico ahead of the 2022/23 season.
The 19-year-old AS Roma attacker played Shatta Wale’s hit song ‘On God’ in the background as he majestically walked onto the pitch to join his team members.
In the video posted on the official social media page of AS Roma, Afena-Gyan was seen walking onto the pitch and singing the lyrics of Shatta Wale’s song word by word as it played at the famous Italian stadium.
He even put up an act by pretending to fall as he entered, just to draw the attention of football lovers to the song.
This is the second season for Felix Afena-Gyan with the Italian giants after a breakthrough campaign last season. His role in the club winning the inaugural UEFA Conference League was remarkable.
The teen sensation has been rewarded with a long-term contract in the summer transfer window and will now be at AS Roma until 2026.
SM family, the largest music fan group in the country also reacted to the video by pledging undying support for Afena-Gyan.
Here are some comments by netizens:
Kwame Ghana Adomako said; “This is how it’s supposed to be, Ghana to the top.”
“Woow God bless you Felix Afena Gyan you made SM fans proud,” AP Sour blessed him.
Mohamed Muhi-Deen noted, “ The number is ‘Shazams’ about to spike.”

IMF to deploy another mission to Ghana in coming weeks

No light at end of load shedding tunnel as Eskom announces...

Davido prepares to perform at O2 Arena next month