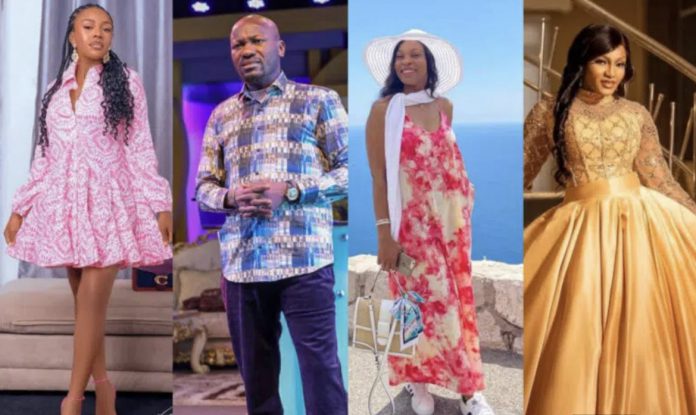 Nigerian actress, Kiitan Bukola has questioned why many of her colleagues are speaking highly of the controversial clergyman, Apostle Suleman.
Controversial blog, Gistlover threw many female actresses into fury as the blogger dragged them for having an affair with the foremost religious leader.
Recall that there had been a series of allegations leveled against Apostle Suleman after videos and messages of ailing actress Halima Abubakar surfaced online.
Amid the allegations and the issues between Halima Abubakar and Apostle Suleman, Gist lover via its page dropped the names of some Nollywood actresses who the blog claimed had slept with Apostle Johnson Suleman for money.
Names like Shan George, Lilian Bach, Iyabo Ojo, Ruth Kadiri, Mercy Johnson, Chinyere Winifred, Larriet Omo Brish, Vivian Metchie, Georgina Onuoha, Ini Edo, Joy Ogbunu, Angela Okorie, Mary Uranta, Queen Nwokwoye, among others.
Meanwhile, Queen Nwokoye debunk the allegation noting how it has become a Nigerian thing to always assume that once you know someone, you are sleeping with the person.
Queen stated that she doesn’t owe anyone an apology for meeting Suleman as she would meet more people in life.
Speaking highly of him, Queen described the Apostle as a good man affirming that nothing will make her deny him and at such anyone who has a problem with him should tackle him themselves and stop dragging her into it.
“It is a Nigerian thing to always assume that once you know someone, you are sleeping with the person but that one concern una. I have met a lot of people, I will still meet more and I do not owe anyone any apologies for people I have met and associated with. Pastor Suleman is a good man. Nothing will make me deny knowing him.
You choose the kind of relationship you want to have with someone and all friendships mustn’t end in bed. So if you have a problem with him, settle it with him. Don’t recruit people into your mess. I will never allow myself to be used to make Pastor Suleman look bad Perioddddddd”
However, Kiitan Bukola took to the comment section of Linda Ikeji’s blog post questioning why many of them were speaking highly of him.
She further questioned the essence of debunking the news if he was a good man.
Kiitan pointed out how someone can be good to a particular person and still be bad to another.
“Why is everyone particular about saying he is a good man he is a good man while debunking… GOD knows best… One thing I know is someone can be good to you and still be bad to another person”.

Mass exodus of medical personnel to foreign countries must stop –...

Ebenezer Obey commiserates with KSA over loss of his wife