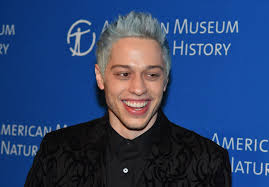 American comedian and actor, Pete Davidson and Chase Sui Wonders have seemingly moved out of the friend zone.

The duo who featured in “Bodies, Bodies, Bodies”, were spotted getting cozy while grabbing a bite in Brooklyn on Monday, January 9.

Photos obtained by TMZ showed Pete and Chase sitting side by side in a booth at Baba’s Perogies as they laughed at something they were watching on the comedian’s phone.

At one point, Wonders even wrapped her arm around the comedian’s shoulders as she pressed her cheek against his. The new couple even exchanged a couple of sweet smooches, according to other customers at the restaurant.

Both actors kept things casual in sweatshirts as they snuggled up to one another.

However, the outing marks the fourth time Davidson and Wonder have been spotted together over the last month.

The potential new couple who reportedly met in 2021, reunited in October 2022 after Wonders joined the cast of Davidson’s new show “Bupkis,” which is a loose adaptation of his life.

Meanwhile, this is coming after Pete Davidson and Emily Ratajkowski called it quits. The comedian is known to date some of Hollywood’s hottest stars including Kim Kardashian, Arianna Grande and Kate Beckinsale

Stop the fake life you are all living” – Angela Okorie...