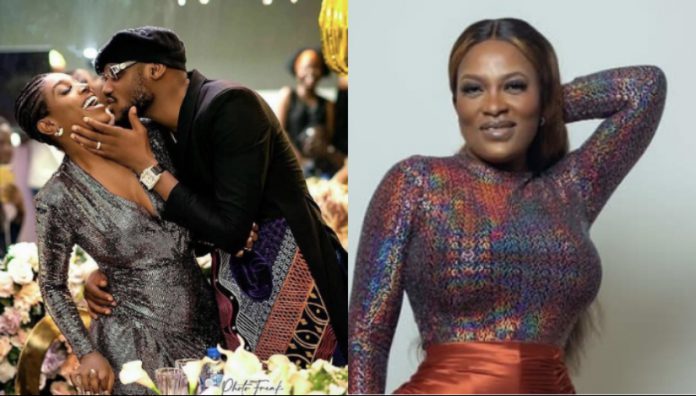 Pero Adeniyi, former girlfriend of innocent ‘2Baba’ Idibia, has denied assertions made by the singer’s wife, Annie, which led to a family drama last month.

In September, the Annie took to Instagram to call out her husband for alleged cheating involving Adeniyi.

The actress wrote, “What kind of man takes his kids to Disney and spends nights in the same apartment with his kids and their mother? How many times have you gone to see your kids with Pero and she stays with you and the kids under the same roof for nights?”

Her posts led to a reply from the singer’s brother which further broke into a war of words between Annie’s family, and her in-laws.

However, in a current talk with media personality Stella Korkus, Pero said that 2Baba did not come to see her in America.

According to the mother-of-four, she heard the singer came to America but they didn’t see each other and she was with her boyfriend at that time.

She said, “I heard he came to America in August but we didn’t see each other. It’s not every time he comes to America that we see. His brother lives there, so it’s possible that he may have gone there to stay with him.

“My boyfriend was even with me the last time I heard 2Baba was supposed to be with me and I was quite shocked and wondered if there are two Peros.

“When that story broke,I got so many calls that woke me up that I had to make calls to find out what was wrong. I called his manager and he told me, ‘Pero this is not about you’. If it was not about me, why is my name mentioned?”

Pero, who had three children for 2Baba, opened up about her relationship with the singer, stating that she’s keeping a distance from him.

“I had not even spoken to him for about four months before I was woken up with calls to go and see I am trending online because Annie mentioned that he had run off to stay with me in America. We don’t really talk and we are not friends. It is because of this same reason that I have stayed away from him,” the US-based make-up artist said.

Nigeria Has To Borrow To Fund Infrastructural Development, Says Lawan