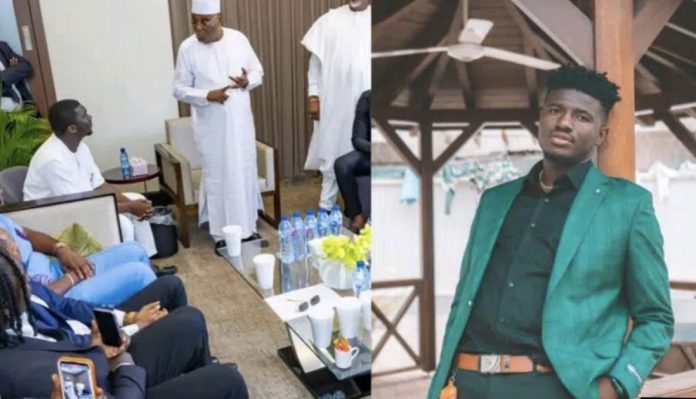 Nigerian Skitmaker, Abisi Ezechukwu, popularly known as Nasty Blaq has opened up on the viral photos of himself and colleagues with PDP’s Presidential candidate, Atiku Abubakar.
According to the comedian, the photos do not in any way prove that he publicly endorsed any politician ahead of the forthcoming general elections.
While explaining on Instagram, Nasty clearly stated that he is working with other entertainers to fully get the youths involved in the Nigerian political terrain.
He wrote: “I have been informed that some posts going round social media have suggested I endorsed political candidates for the upcoming general elections
I would like to state VERY CLEARLY that I HAVE NOT ENDORSED ANY CANDIDATE OR PARTY!
As a young Nigerian, I am doing my own bit to contribute to the political process. Recently I joined other public figures to explore ways of engaging with stakeholders in the election process. We have had several meetings with political aspirants and even the Independent National Election Commission. Our goal is to channel our influence to good, and find ways to better ascertain how young people can participate in the political process, and in a healthy way.
It is ridiculous that anyone suggests I have endorsed parties or candidates from opposing parties.
As a public figure, I understand the importance of clarity and transparency. On this note, I ask any and every one spreading these falsehoods about me stop IMMEDIATELY!
Thank you everyone for your understanding and cooperation.”

When Tinny went very hard on me, it really hit me...