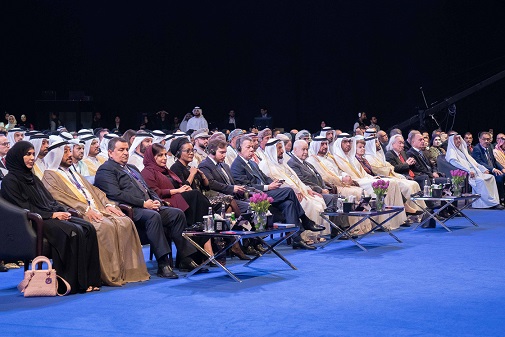 “Forty years have lapsed since Sharjah’s cultural project began. This project hasn’t been written but rather has been in the form of oral guidance. Our leading cultural, scientific and artistic developments and achievements have been outcomes of participatory dialogue and open government–citizenry communication. I call this ‘popular communication’,” he added.

The Ruler emphasised that accountability for the success of public communications lies with multiple stakeholders from across various sectors, not just the government. “Communication’s core function is that of an enabler. Good communication accompanies people to be able to enjoy various public services and enhance their lives. Sharjah has achieved this.”

“Why is there a pressing need to transform the role of government communication from a one-way message delivery service to a two-way and participatory process?” asked Sheikh Sultan bin Ahmed Al Qasimi, Chairman of Sharjah Media Council (SMC), noting that the challenges governments face because of misinformation or fabricated news being spread by media have affected the trust between them and their people.

He hailed the efforts and leadership of the Sharjah Ruler for having transformed the Emirate over the past five decades into a regional hub for cultural advancement and furthered its pioneering experience in cultural communication.

In a recorded message, HRH Prince El Hassan bin Talal, President of Arab Thought Forum, said: “We are witnessing the post-communication age, which aims to envision the future through a review and assimilation of the past. The internet has become powerful enough to cross borders, take down national powers and overthrow local traditional laws. It is redefining concepts of fear, love, hate, sympathy, learning, education, knowledge, success and failure.”

Talal Abu-Ghazaleh, Chairman and Founder of the Talal Abu-Ghazaleh Global, said: “AI will govern our future, change our lives and every detailed aspect of it. The more you learn, the more you know how much you don’t know. Internet is the only equal universal platform in the world. It is where everyone is offered a level playing field.”

Juan Manuel Santos, former President of Columbia, said: “Three instrumental pillars are key to change, “first, political will and capacity to produce change; second, the courage and determination to do very unpopular but right things; and third, strategic communication – a very important and transversal element.”

Dr Michio Kaku, bestselling author and Theoretical Physicist and Futurist, talked about ways to fully harness full potential of the human mind, saying it was the most powerful force in the universe. “The human mind has moved rivers and mountains, created cities in the desert, but by itself the mind is powerless. It has to communicate, it has to engage, it has to share knowledge.”

The inaugural session included an insightful discussion with Priyanka Chopra Jonas, global superstar and activist, and an inspiring speech by Irina Bokova, Bulgarian politician and the former Director-General of UNESCO.

Organised by the International Government Communication Centre (IGCC), a subsidiary of Sharjah Media Government Bureau, IGCF 2020 features 57 events, discussions and workshops, focusing on four pillars: ‘Embedding a culture of engagement in government’, ‘Technology as a community enabler’, ‘Communication through culture’, and ‘Holistic well-being’.