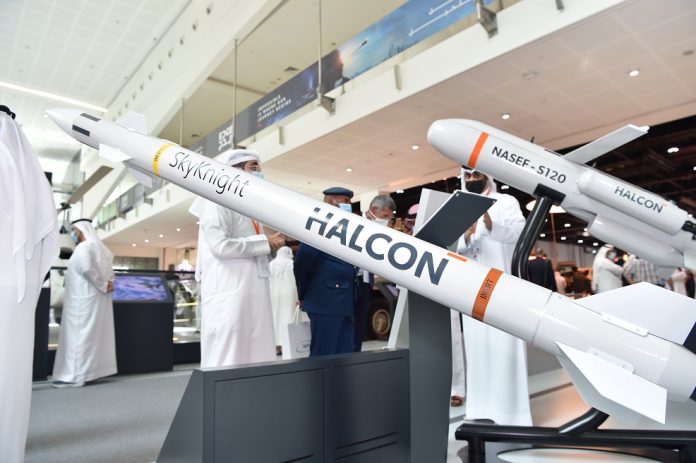 HALCON, a regional leader in the production and supply of precision-guided weapons, today unveiled SkyKnight – the first UAE designed and manufactured counter-rocket, artillery, and mortar (C-RAM) missile system, at the International Defence and Exhibition Conference (IDEX) 2021.

EDGE, the parent company of HALCON, has been developing a short-range air defence system, as has Germany-based Rheinmetall AG, which was actively seeking a missile system to form part of its Skynex air defence system. The companies decided to jointly offer a solution, with HALCON providing SkyKnight, the missile system to the highly regarded Oerlikon Skynex Air Defence System, which sets new standards with its unique open architecture.

Commenting on this landmark international elevation of a UAE-manufactured missile, H.E. Faisal Al Bannai, EDGE Group CEO and Managing Director said: “SkyKnight is the UAE’s first, but will not be the last air defence missile developed by HALCON. We are pleased to team up with Rheinmetall, a leading player in the defence industry, for us to jointly offer the world’s most advanced and comprehensive C-RAM solution leveraging our SkyKnight missile and Rheinmetall’s Skynexsolution. This collaboration is a clear message that EDGE is open to teaming up with various players to offer joint advance solutions.”

Rheinmetall AG, through its Swiss subsidiary, Rheinmetall Air Defence, has deployed the Skyguard system in numerous countries, which can bring down fast, small targets, and is used as the inner tier of layered air defence of vital points and critical military infrastructure. Countries that have rolled out Skyguard systems will ultimately upgrade to Skynex, placing HALCON, its SkyKnight C-RAM missile system, and the UAE at the forefront of air defence system innovation.

HALCON is part of the Missiles & Weapons cluster within EDGE, an advanced technology group for defence that ranks among the top 25 military suppliers in the world.

EDGE is an advanced technology group established to develop agile, bold and disruptive solutions for defence and beyond. Enabling a secure future, it is dedicated to bringing innovative technologies and services to market with greater speed and efficiency.  Consolidating over 25 entities and employing more than 13,000 brilliant minds, it offers expertise across five core clusters: Platforms & Systems, Missiles & Weapons, Cyber Defence, Electronic Warfare & Intelligence and Mission Support.   Headquartered in Abu Dhabi, United Arab Emirates, EDGE is a catalyst for change – set to revolutionise the industry and change its fundamentals.

Launch of The Global Phosphorus Institute Looks to Provide Sustainability for...

10 Classic Taiwanese Films to Stream for Free on TaiwanPlus’s First...