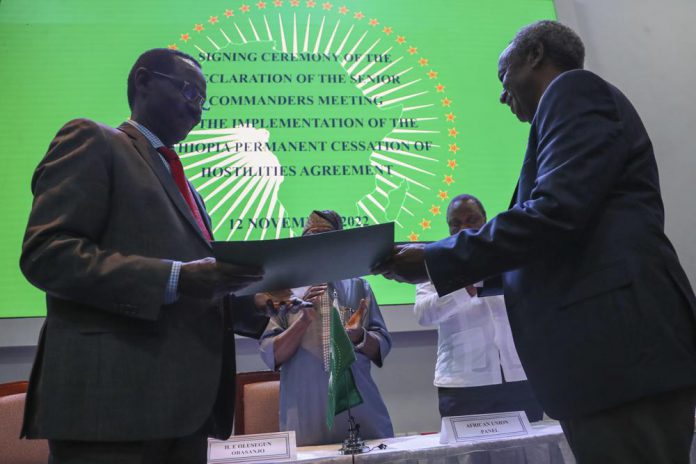 Top military commanders from Ethiopia and its embattled Tigray region have agreed to allow unhindered humanitarian access to the region and form a joint disarmament committee following last week’s truce.

The commanders signed an agreement on Saturday that they said calls for disengagement from all forms of military activities.

Both parties have agreed to protect civilians and facilitate the delivery of humanitarian aid to the region of more than 5 million people.

The agreement states that disarmament will be “done concurrently with the withdrawal of foreign and non-(Ethiopian military) forces” from Tigray.

The lead negotiator for Ethiopia, Redwan Hussein, said Saturday’s signing event created a conductive environment for ongoing peace efforts, noting that the next meeting of military leaders will “most likely” be held in Tigray in mid-December before a final meeting in Addis Ababa, the Ethiopian capital, in January.

In a separate statement late Saturday, Ethiopia’s federal authorities said that “efforts are being made to deliver humanitarian assistance to most of the Tigray region which is under (Ethiopian military) command.”

That statement noted that representatives of Ethiopian and Tigrayan militaries meeting in Kenya discussed “detailed plans for disarmament” of Tigray forces, including an agreement on the entry of Ethiopian forces into the Tigrayan capital of Mekele.

The Tigray conflict began in November 2020, less than a year after Ethiopian Prime Minister Abiy Ahmed was awarded the Nobel Peace Prize for making peace with Eritrea, which borders the Tigray region and whose fighters have been fighting alongside Ethiopian federal troops in Tigray.