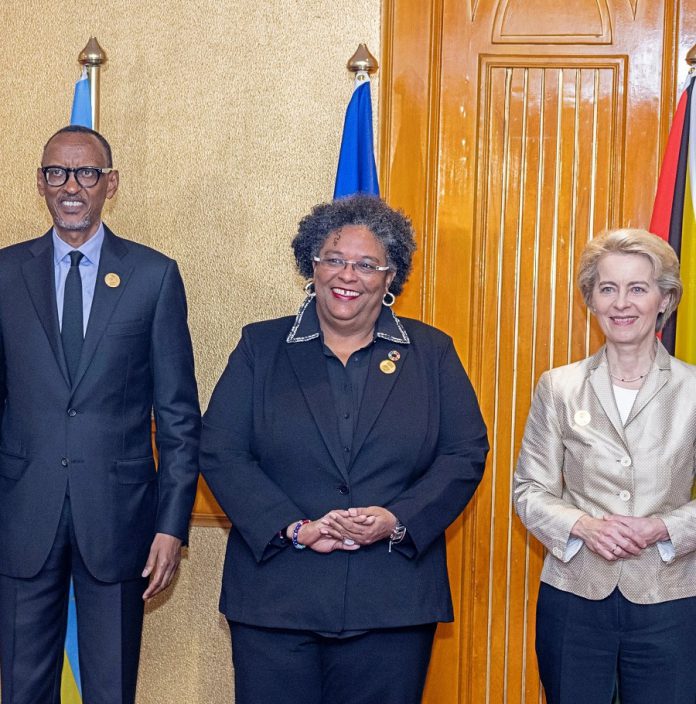 Today, Prime Minister of Barbados Mia Amor Mottley, President of the Co-operative Republic of Guyana H.E. Mohamed Irfaan Ali, and President of the Republic of Rwanda. H.E. Paul Kagame met in Sharm El-Sheikh on the sidelines of COP 27 to discuss the furthering of pharmaceutical equity for global public health with President of the European Commission Ursula von der Leyen, and Director-General of the World Health Organization (WHO) Dr Tedros AdhanomGhebreyesus.

The key recommendation emanating from the meeting is an inter-governmental South-South cooperation initiative aiming at the development and manufacturing of 60% of all essential, contemporary pharmaceuticals for the populations of Latin America, the Caribbean, and Africa within their respective continents by 2040. Initially, it is intended for the cooperation to focus on next generation oncological drugs, preventive and therapeutic vaccines, as well as on modalities for women’s health. It is also stipulated that all manufacturing sites related to this endeavor will be in full compliance with the relevant stipulations of the COP21 Paris Agreement.

The leaders of the countries and organizations which have launched this initiative have emphasized that all interested countries in the Caribbean, Latin America and African region are invited to join.

“Today is a truly historic moment as with a great sense of urgency and understanding, South-South Cooperation rose to the fore to address matters of global public health,” Prime Minister Mottley said. Her Excellency added “I want to dearly thank President Dr Mohamed Irfaan Ali, President Paul Kagame and President von der Leyen for recognizing the importance of this venture and congratulate all stakeholders who have been instrumental in developing this pharmaceutical transatlantic bridge between Africa and Latin America and the Caribbean.”

President Mohamed Irfaan Ali of Guyana said “I am honored to be a part of this groundbreaking initiative that is a testimony to true South-South cooperation. From the outset I congratulate my Colleague Honorable Mia Amor Mottley, Prime Minister of Barbados for stewarding this cause and to His Excellency Paul Kagame, President of Rwanda for his role in advancing this partnership that would provide the opportunity for the peoples of Africa, Latin America and the Caribbean to have access to pharmaceuticals developed within their own regions.”

President von der Leyen of the European Commission added “Health is a top priority for citizens, wherever they live. The EU is committed to supporting our African and Latin American and Caribbean partners in boosting their own capacity to produce vaccines, medicines, and health technologies. This will increase the resilience of their health systems and contribute to economic growth. Thanks to close cooperation between all the necessary actors, the public authorities, the scientific community and the private sector, we will get there quicker.”

President Paul Kagame of Rwanda concluded: “The progress we have made toward pharmaceutical equity in Africa is a result of partnership both within our continent, and beyond. We would like to see more of this kind of practical cooperation between the Caribbean and Africa, and look forward to supporting this endeavor.”

“One of the most important lessons of the pandemic is that manufacturing capacity for medicines, diagnostics vaccines and other tools is concentrated in too few countries,” said Dr TedrosAdhanom Ghebreyesus, WHO Director-General. “At the World Health Assembly last year, WHO’s Member States approved a resolution for strengthening local production of medicines and other health technologies. International networks can play a crucial role in expanding local production, such as this new partnership between Latin American and the Caribbean and Africa. I welcome the today’s communiqué, which emphasizes the importance of expanding not only manufacturing capacity, but also regulatory capacity, with technical expertise and the trust of communities. I’m also pleased to see the commitment in the communiqué to establishing new manufacturing capacity with a strict net zero emissions rule.”

Prof Dr Senait Fisseha added: “The Caribbean and Latin America can learn from the tremendous progress African countries have made on vaccine manufacturing in the past two years. Similarly, African countries can learn from the innovative ecosystem LAC countries have created around commodities, like pooled procurement mechanisms such as the Revolving Fund for vaccines. Today, we had the opportunity to consider how we can expand these efforts beyond vaccines and oncology into areas like reproductive health. We all face common challenges in reproductive health – teenage pregnancy, maternal mortality and morbidity, and unsafe abortion, among other things. And like with vaccines, we currently rely heavily on imported medicines and commodities, putting our supply security at risk.”

The Communiqué has been approved by acclamation at the end of the session. It can be accessed at https://www.kenup.eu/press#PharmaEquity_8-Nov-2022 .

Technology Innovation Institute Appoints Globally-Renowned Experts to Board of Advisors at...