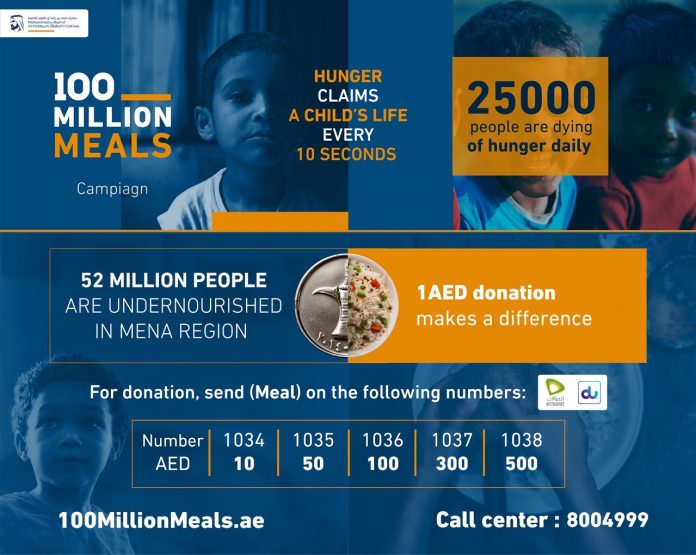 Low-income families and individuals in 10 African countries including Uganda, Ghana, Angola, Sierra Leone, Sudan, Egypt, Somalia, Kenya, Mauritania, and Tanzania, will receive food parcels throughout the holy month of Ramadan, as part of the ‘100 Million Meals’ campaign launched by His Highness Sheikh Mohammed bin Rashid Al Maktoum, Vice President and Prime Minister of the UAE and Ruler of Dubai.

The region’s biggest food donation drive aims to raise $27 million to distribute food parcels that are sufficient to prepare 100 million meals across 20 countries in the Middle East, Africa and Asia.

To ensure a swift and integrated food distribution, the campaign’s organizer the Mohammed bin Rashid Al MaktoumGlobal Initiatives (MBRGI) is teaming up with the United Nations World Food Programme, a network of food banks in the region and humanitarian organizations in beneficiary countries.

Since its launch, the ‘100 Million Meals’ campaign has been attracting massive donations from individuals, businessmen, philanthropists and corporations inside and outside the UAE to provide food parcels that empower people in need to prepare their own meals during the Holy Month of Ramadan. Every 30 US cents donation provides one meal for someone in need in the beneficiary countries, including 10 in Africa.

His Highness Sheikh Mohammed bin Rashid Al Maktoumsaid: “The COVID-19 pandemic has pushed many populations into an economic despair and pushed us, at the same time, to be more compassionate and giving. Four hours away from us are 52 million people battling hunger. We need to take urgent action to empower underserved communities.”

The Ramadan campaign is part of the UAE’s contribution to global efforts to combat world hunger, a major challenge that has been exacerbated by the outbreak of COVID-19. The drive also aims to support the international community in achieving the second of the 17 UN Sustainable Development Goals to end hunger by 2030.

The UAE has been a key philanthropic pioneer that works to support the most vulnerable populations across the world. The UAE was named the region’s top and the world’s fifth largest donor to the World Food Programme in 2019, with a contribution of US$270 million.

More than 820 million people are undernourished globally, including 52 million people across the MENA region. Malnutrition contributes to about 45 percent of deaths in children under-5 years and hunger claims a child’s life every 10 seconds.

Established in 2015, Mohammed bin Rashid Al MaktoumGlobal Initiatives is a non-profit organization of more than 30 humanitarian and developmental entities that carry out campaigns and programmes devoted to empowering vulnerable communities around the world.

Breaking barriers and creating jobs in Africa; the story of FXKudi’s...

New twist in dispute over removal of Cope official

Regional brands to benefit from greater depth and scale of data...